How to Prove a Sterility Assurance Level of 10⁶ PART 1: The OVERKILL Method(s)

Sterile product is defined as material (i.e., final product, product components, etc.) that is free of viable microorganisms. There are numerous sterilization modalities in use and several recognized approaches for achieving a state of sterility. Perhaps the most common of these approaches is the overkill method, which is the focus of this Spore News. There are different variations of the overkill method discussed in the standards, and although the terminology may differ somewhat, the processes are fairly consistent throughout.

The overkill method is based on the inactivation of a high population of highly resistant reference organisms with the assumption that these provide a far greater challenge to the process than the actual bioburden. This method is appropriate for use with heat-stable products, a great many of which are reusable. For heat-sensitive materials, other methods are available and are discussed in another Spore New publication. The overkill method is typically a partial cycle approach meaning that the process is developed and validated under conditions less than that of the full cycle. Note: A “full cycle” method does exist and is also discussed below. The partial cycle method consists of two options, the most popular of which is the “half cycle” method, and the other of which is the “cycle calculation” method. Both methods are designed to provide a 12+ spore log reduction (SLR) of the bioburden, the characteristics of which (i.e.; population, resistance, identification) are not directly determined. Rather, a worst-case condition is assumed for the bioburden. For example, in a moist heat process the bioburden characteristics are assumed to have a of population of 1.0 X 106, and a D121-value of 1.0 minute, and the inactivation of a reference organism, meeting minimum resistance requirements specified in the standards (e.g.; D121-value ≥ 1.5 minutes per ISO 11138-3), is used to confirm the lethality of the process.

The overkill method(s) are comprised of a physical and a biological component. The sterilization processes, in particular moist heat and dry heat cycles are developed by applying physical parameters (e.g., time/temperature combinations) to reach a theoretical lethality often expressed in terms of F0 for steam or FH for dry heat. For processes with chemical sterilants such as ethylene oxide a defined concentration of sterilant is injected under defined and controlled conditions (e.g., temperature, pressure, relative humidity (RH)).

The continuous control of these parameters during the cycle is required to guarantee the effectiveness of the sterilization process. A physical validation of the process is accomplished using probes (e.g., temperature, pressure, and RH data loggers) and ideally would demonstrate the homogeneity of these conditions at all points within the load. Complete uniformity within the load is not possible and it is important to identify the “cold spots” or areas of lower lethality which are then the focus of the biological testing

Biological validation is the only method that can directly measure the expected lethality of a sterilization process developed from the applied physical conditions. This is accomplished using biological indicators (BIs), with defined population and resistance characteristics. Note: BIs can be commercially prepared units or inoculated product. For the traditional sterilization processes (i.e., moist heat, dry heat and EO), when the physical parameters are maintained at strictly defined conditions, the microorganisms are inactivated in a log-linear manner, thus allowing very good estimation of the lethality from which a sterility assurance level (SAL) can be extrapolated. Note: The z-value of the biological indicator for moist heat processes can be a value other than 10 °C (the number used in the F0 calculations), which can lead to differences in the physically integrated lethality and the directly measured lethality obtained from the biological indicators.

Several standards give guidance on the overkill method including:

The Half Cycle Method

The half cycle approach is perhaps the simplest of the validation processes in demonstrating the 12 SLR. As it is not possible to produce BIs with a population of 1012 that could directly demonstrate the required 12 SLR, the approach consists of measuring the lethality reached during the half cycle using a Log 6 population BI. The method is based on the following assumptions:

As previously noted, a prerequisite to biological validation is the identification of the areas of lower lethality. For thermal processes, this is typically accomplished by thermal mapping of the load during a process to identify the cold spots. For chemical sterilization processes, additional data on critical parameters is necessary and may include the use of RH and pressure data loggers as well as chemical indicators. Once identified, these areas of lower lethality will be the focus of all subsequent biological testing. For some complex devices, it may not be possible to position physical probes into small lumens or channels and biological mapping may be the only option for identifying the areas of lower lethality. This can be accomplished using uniquely designed BIs (such as a micro-strip, thread or wire) or by direct inoculation. In these cases, the BI will be the only source of information regarding the lethality delivered to those locations. These sites are often overlooked because they are not easily accessible by the probes and yet there is a real possibility that they are areas of lower delivered lethality.

When validating the process biologically, the BI challenge can be in the form of ISO 11138 compliant BIs (meeting the minimum performance criteria), inoculated product, or some other form of a Process Challenge Device (PCD). Data from the inoculated product D-value studies will be key in deciding the form of biological challenge moving forward. These studies can be performed on direct contact surfaces (porous materials/elastomers such as plugs, silicone needle protectors, etc.) and liquid products (Spore News SN069 Why Perform a Product D-value Study?). If the data indicate that the D-value of inoculated product is less than that of commercially prepared BIs, then it is appropriate to conduct all further testing using the BIs. However, if the reverse is true and the inoculated product provides a higher D-value than the BIs, then the use of the BIs is not appropriate. In these cases, units of inoculated product itself can be used as the biological challenge or the use of a PCD that demonstrates a greater challenge to the process than the inoculated product. In the event this leads to an unacceptably long sterilization process, the Biological Indicator/Bioburden method can also be considered.

The BI/PCD must have a population of a least 106 spores which are then placed throughout the load in the areas of lower lethality. During cycle development, a 6 SLR should be demonstrated on the BI in the half cycle process and some range finding exposures may be needed to achieve this result. There are three possible outcomes from the testing:

Replicate BIs (3 units) are placed in each location of the load identified to have lower delivered lethality. The BI lot is labeled with a population of 2.0 X 106 spores/BI unit, and after treatment to the half-cycle process, the BI results after incubation are:

These results indicate that location 2 provides the greatest challenge to the process and the MPN of surviving spores from that location is used in the calculation:

The SLR is calculated as follows:

N0 is the BI pre-exposure population and

Nf is the BI post-exposure population calculated from the MPN

Once a process has successfully achieved the appropriate SLR, replicate testing is required to demonstrate the process stability. Figure 1 provides a graphical representation of the half cycle method 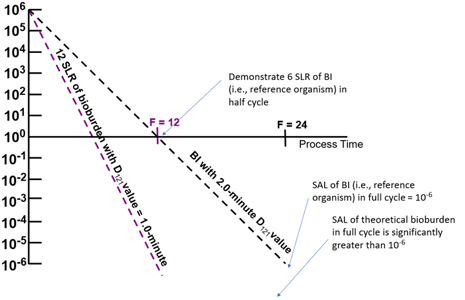 Figure 1. Graphical representation of the Overkill— Half Cycle method

The half-cycle method can also be partially applicable to processes whose parameters can vary during the cycle such as Vaporized Hydrogen Peroxide systems where lethality will not necessarily follow a log-linear model but rather a biphasic one. The approach defines the half cycle where all BIs are negative for growth, (demonstrating an appropriate SLR) and then doubles the exposure time to have the necessary lethality margin as recommended in USP 1229.11. Note: it is not appropriate to extrapolate a SAL in a process that demonstrates non-linear kill kinetics.

The cycle calculation method is similar to the half cycle method in that the process must demonstrate a 12 SLR from which an SAL is extrapolated from a process cycle that is less than a full cycle and in practice is less than the half cycle. All prerequisite work is the same but the SLR from the partial cycle is determined through direct spore counts or a most probable number of surviving spores calculated from fraction negative data.

If through the cycle development activities, a process delivering an F0 of 24 minutes is selected, a partial cycle delivering an F0 of 6 minutes can be used for the biological validation. The BI to be used in this example has a population of 2.4 X 106 and a D121-value of 1.7 minutes. The sterilization process is conducted as described above (i.e., placing BIs in areas of lower lethality), and upon completion of the cycle, the BIs are retrieved from the load, and a direct spore count is determined through the performance of population assays. The results of the population assay in this example ranged from 1.1 x 102 to 7.3 x102, and to determine the minimum SLR, the highest recovered spore count is used in the calculation:

The SLR of the full cycle can then be calculated using the formula:

In this example, a 14.1 SLR has been demonstrated to satisfy the requirements. The SAL can be calculated using the formula:

See Figure 2 for the graphical representation of the Cycle Calculation method. 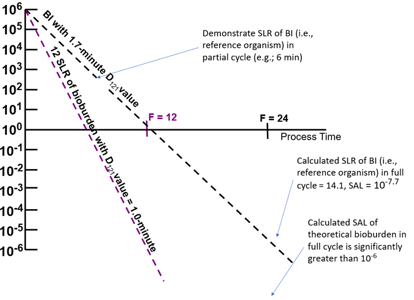 The full cycle method is similar to the other overkill methods in that the process must demonstrate a 12 SLR. However, it is not the SLR of the BI that is demonstrated (as is the case with the other overkill methods), but rather it is the SLR of the of the theoretical bioburden. Cycle lethality is still confirmed through the use of a BI/PCD that demonstrates an Fbio>12 min. The sterilization process is conducted as described above (i.e., placing BIs in areas of lower lethality) and demonstrating kill under full cycle conditions (i.e., this is not a partial cycle approach). The Fbio of a BI is the product of the log of the population and the D-value and allows different populations and D-value combinations to achieve a value of 12. For example, a BI with a 2.0 X 105 population must have a D-value of 2.3 minutes or greater to meet the requirement (log 2.0 X 105 X 2.3 = 12.2). Of the overkill validation methods, the Full Cycle approach is the least robust. See Figure 3 for the graphical representation of the Full Cycle method. 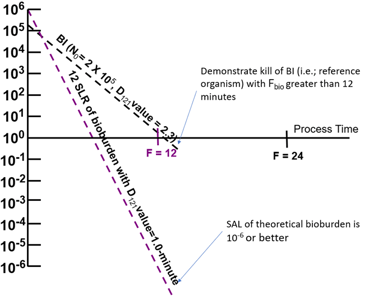 As noted, the overkill method(s) is only suitable for use with heat-stable products and allows for minimal knowledge of the product bioburden. The half cycle method is perhaps the most commonly used of the overkill approaches due to its simplicity. However, as pharmaceutical and other newly developed products are increasingly becoming heat-sensitive, other validation methods are gaining in popularity. Today, standards such as the USP and the EP recommend the BI/Bioburden method to validate these processes. The BI/Bioburden method requires greater knowledge and stricter control of the bioburden while still allowing the ability to establish a SAL of 10-6. This method is covered in Spore New SN081 How to Prove a Sterility Assurance Level of 10-6, PART 2: The Biological Indicator/Bioburden and Bioburden Methods

Using Replicate BIs to Evaluate Biodecontamination Cycles in Isolators Fedegari Resistometer Evaluation What is the D-ifference in D-value? How to Prove a Sterility Assurance Level of 10⁶ PART 1: The OVERKILL Method(s) Caramelization of Liquid Submersible Biological Indicators due to Extended Thermal Insult Understanding Biological Indicator Grow-Out Times Why Perform a D-value Study?