by Eric Gillitzer, Ph.D. and updated by Mesa staff

Vaporized Hydrogen Peroxide (VH2O2) under ambient pressure conditions is used in industrial settings to decontaminate aseptic fillings lines, isolators, restricted access barrier systems (RABS) and other enclosures. In hospitals, VH2O2 in a pre-vacuum modality is used mainly to sterilize endoscopes and other instruments that may be sensitive to high-temperature steam. Vaporized hydrogen peroxide can be considered, relatively speaking, to be a “new” method for sterilization/decontamination. The use of high-temperature steam/moist heat, low-temperature steam/moist heat, dry heat, and ethylene oxide (EO) as sterilization techniques have been around for decades. Hydrogen peroxide has only recently started to be used as a means of large-scale decontamination/sterilization.

Potential benefits of using VH2O2 as a decontamination/sterilization modality are: 1) VH2O2 easily and  quickly, given the proper conditions, breaks down into oxygen (O2) and water (H2O). 2) Production of liquid hydrogen peroxide is easy and relatively inexpensive. 3) VH2O2 has proven effective at ambient temperatures and humidity conditions. 4) No pressure vessel is required, so for large volume areas, such as filling line enclosures or animal holding rooms, hydrogen peroxide has proven very useful.

Some of the difficulties in using VH2O2 as a decontamination/sterilization agent are: 1) The population of a biological indicator (BI) does affect its resistance in VH2O2. 2) VH2O2 is not compatible with the cellulosic materials normally associated with BIs for steam, EO and dry heat processes, and alternative carriers must be used. 3) No standards currently exist to guide in the determination of resistance of BIs produced for this process.

Vaporized hydrogen peroxide as a decontamination/sterilization modality has not been used as extensively as steam, dry heat, or EO and as such, much less is understood about parameters that affect BI performance. Population affects performance, but not in the same fashion as it affects BI performance in a steam process. With steam, dry heat, and ethylene oxide, the measured resistance value is consistent regardless of the population, given that the exposure conditions are otherwise kept the same. For example, the resistance of a strip BI used in 121°C steam cycle may be 1.8 minutes when assayed with an E6 population BI. Strips inoculated with the same spore crop but at a population of E5, E4 or E7 will test with a D-value of approximately the same 1.8 minutes. Experiments with dry heat, EO, and low-temperature steam yield similar results.

With spores on carriers used for VH2O2 monitoring, the same IS NOT TRUE. Testing has demonstrated with LOG-456 product made by Mesa Labs, that the resistance of spores on a carrier does not stay constant as the population increases or decreases. The LOG-456 BI product consists of three carriers respectively inoculated with E4, E5, and E6 spores from the same crop and sealed in separate compartments. Tables 1 & 2 show the resistance values for several lots of LOG-456 BIs. We can see, as the population decreases, the resistance decreases. The explanation for this is quite simple. As killing of spores by VH2O2 is not a penetrative process, the more closely placed or packed the spores are on the carrier, the less direct access the sterilant has to the spores. Thus, as the concentration of spores increases, the likelihood of a spore being in direct contact with another spore increases. 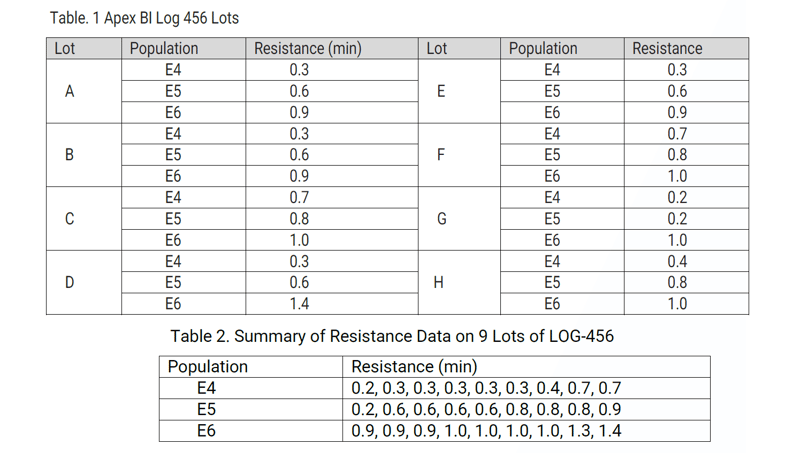 Regarding spores touching each other or stacking on the surface of the inoculated material, one must understand that this is always going to happen. This occurs in a somewhat predictable or repeatable fashion with a smooth, 2-dimensional carrier such as a stainless-steel disc. Because of the nature of the stainless-steel surface, there is ALWAYS going to be an edge effect at the edge of the inoculated area. The formation of the edge effect may be more of an issue with a flat surface (Apex spore ribbon) than with an angled surface (Apex spore disc), but it is always going to be present.

With a 3-dimensional carrier such as fiberglass, it is easy to imagine spores penetrating the matrix of the carrier and then aggregating as they are filtered out of suspension by the fibers of the carrier. With steam, EO, and dry heat, the sterilant is able to easily penetrate both the carrier matrix and any spore aggregates that may have formed during the inoculation process. VH2O2 may penetrate the matrix of the carrier, but as discussed earlier, does not readily penetrate aggregates of spores that may have formed as part of the inoculation process. There are at least two ways to deal with this. One would be to use a cycle that is a bit more aggressive or longer to try to get some penetration through layers of spores that may exist in these sorts of areas. A second method to deal with this would be to use a BI with a population of E4 or E5 rather than E6. Fewer spores mean less potential for stacking or aggregation and potentially, easier killing.

Peroxide concentration and other factors

Another source of frustration with the VH2O2 process is deciding what concentration of peroxide to use. Over time with steam, dry heat, and EO processes, a standard set of conditions was developed. For steam sterilization, the standard condition is 121°C saturated steam. For EO, 60% humidity, 600 mg/L EO at 54°C is the standard condition. There is no standard condition for VH2O2. The Apex product Certificate of Analysis states that resistance testing is done at 2 mg/L of peroxide. Many end-users use less peroxide than this in their testing and use cycles. Other possible impacts on process performance could be variation in the vapor or airflow rate between isolators, variation in the turbulence between isolators, and finally variation in temperature and humidity between isolators. Again, there is no standard set of conditions dictated by the guidance documents to evaluate BI performance, and ISO 18472:2018 details only the instrumentation requirements for a peroxide resistometer but does not define specific parameters.

The performance of the most commonly used chemical sterilant, EO, can be impacted by both relative humidity and temperature during exposure. Mesa Labs has observed that given the same temperature and sterilant concentration, cycles run at low humidity conditions are significantly less lethal when measured with standard BIs. Also, when testing Chlorine Dioxide BIs, we have determined that both temperature and relative humidity during exposure affect BI performance. With these observations in mind, that temperature and humidity can and do affect the efficacy of killing with other chemical sterilants, it seems plausible that the killing efficacy with VH2O2 could likewise be influenced by variations in these same parameters.