Spore News was ‘‘born” in January 2004 and with fifty editions released thus far, I must admit that coming up with new topics is getting more and more difficult. I was thrilled to receive the suggestion when a Spore News enthusiast recently wrote to us stating, ‘‘It would be great if someone would write a Spore News defining different terms that often get confused, such as Theoretical Kill Time, Empirical Kill Time, Sterility Assurance Level, Fo, etc.” On that note, let me remind all of our readers that you are welcome to e-mail us with topics you’d like to see addressed in future Spore News. Being the customer focused company that Mesa Labs strives to be, let us dive in to some Sterilization Vocabulary.

Do note the words, ‘‘at a specified set of exposure conditions”. The D-value is a measure of spore resistance to a particular sterilization process and thus, the D-value will fluctuate with increasing or decreasing exposure conditions. For example, when testing the resistance of BIs manufactured for ethylene oxide processes, we set our resistometer to 54°C, 60% relative humidity and 600 mg EtO/L and at those conditions, ANSI/AAMI/ISO 11138-2:2006/(R)2010 tells us that the D-value shall not be less than 2.5-minutes. If we alter the exposure test conditions, the D-value will also change. This concept leads me to our next definition… Z-value.

The Z-value is a measure of how the D-value changes when the exposure conditions change. The concept of Z-value is typically associated with thermal sterilization processes and the formal definition is the change in exposure temperature that will correspond to a tenfold change to the D-value. To calculate the Z-value that appears on the Certificate of Analysis, we assess D-value at three distinct test temperatures. These three D-value/temperature data points are processed in a log-linear regression analysis and from a graphical perspective, the Z-value is the negative reciprocal of the slope of the line of best fit.

Why do we need Z-value? It allows us to accurately integrate the lethality of a sterilization cycle during all phases of that cycle, including temperature come-up, exposure or dwell phase and cool-down or exhaust phase. For more discussion on the importance of Z-value, please refer to Spore News Volume 5, Number 5 from September 2008.

Finally, let us discuss the difference between calculated, theoretical, and empirical survival and kill times. I will start with ‘‘calculated” as this term appears in USP and ANSI/AAMI/ISO standards.

The calculated kill time is the product of (Log10BI Spore Population + 4) x (D-value). The ‘‘+4” aspect in this equation adds four spore log reductions beyond that which would be necessary to reduce the viable spore population to 1 surviving spore. This amount of lethality delivered in a calculated kill time process essentially results in a 0.01% chance that a BI exposed to the calculated kill time would test as growth-positive. To help illustrate this aspect, review the sequential equations below. Those in bold black font are the calculated survival and kill times that appear in USP and ANSI/AAMI/ISO.

In the above discussion of Z-value I mentioned a recent batch of SterilAmp with 1.9-minute D121C-value. That particular lot has a population label claim of 2.0 x 106 . Thus, the calculated survival time (CST) and calculated kill time (CKT) for this BI would be:

The equations in bold red font above can be used to estimate or predict when one would first start to observe all
positive and all kill in a resistometer. We calculate the Theoretical Survival Time (TST) and Theoretical Kill Time
(TKT) as follows:

Note that the ‘‘calculated” times are more conservative than the ‘‘theoretical”.

When a batch of BIs are manufactured and tested in a resistometer for D-value label claim, all test BIs will be growth-positive in the shorter cycles and all test BIs will be growth-negative in the longer cycles. The intermediate resistometer cycle times will result in fraction-negative observations where a portion of the BIs are positive. The Empirical Survival Time (EST) is the longest resistometer cycle that gives an all positive result. The Empirical Kill Time (EKT) is the shortest resistometer cycle that gives and all kill result. Typically, the ‘‘Theoretical” survival and kill times will closely match the observed or ‘‘Empirical” times we see in the actual data set.

The chart below shows the actual fraction-negative data set that were obtained when assessing the D121C-value for this batch of SterilAmp. 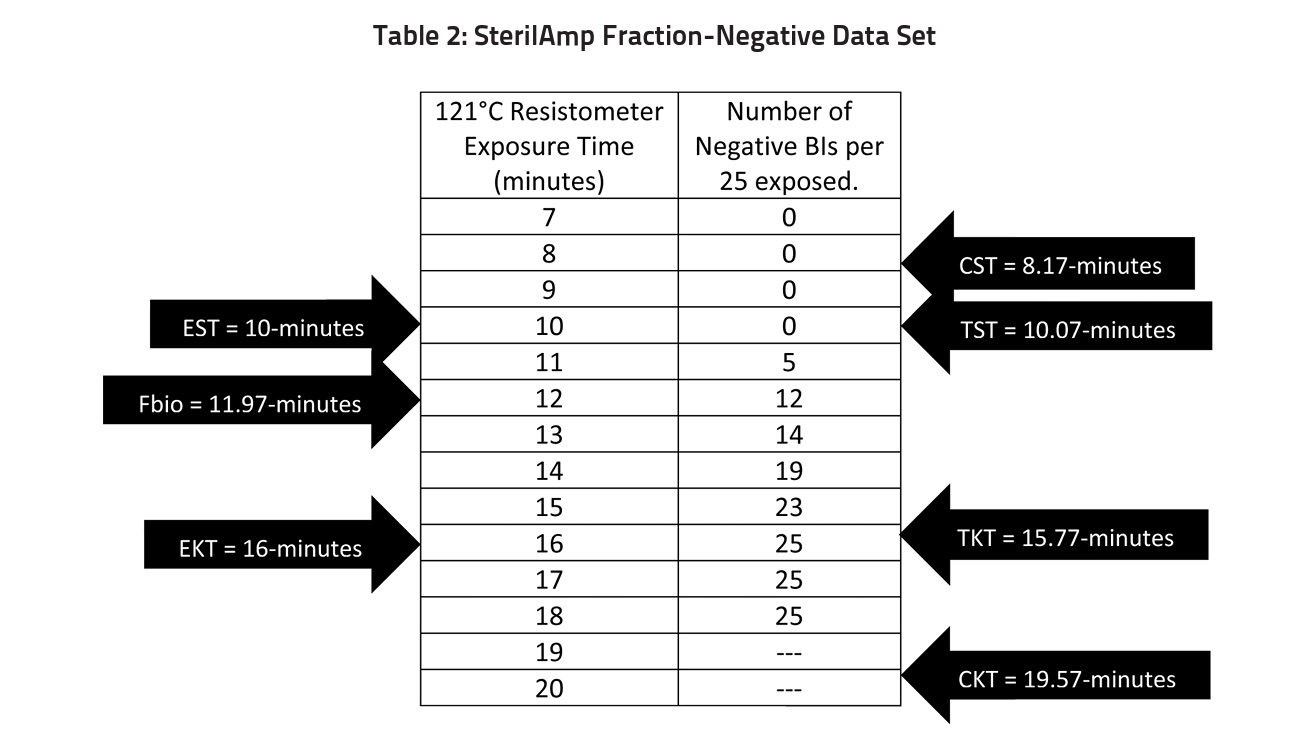 Before we close, look back to Table 1 and you’ll notice an equation that is labeled as Fbio. Mathematically, the Fbio shows the exposure time that would result in one viable spore (on average) left on each BI and thus a 63% survival rate. ANSI/AAMI/ISO defines Fbio as an expression of the resistance of the BI. As such, one can use the Fbio value to compare different lots of BIs. The overall resistance capabilities of any BI are determined by the number of spores per BI and the measured resistance. The greater the Fbio value, the greater the overall resistance of that particular batch of BIs. For additional discussion of this concept, please refer to Spore News Volume 4, Number 3 from May 2007.

This review of Sterilization Vocabulary only begins to scratch the surface of the numerous terms one will encounter. Perhaps we will expand this discussion in future Spore News releases.

Garrett Krushefski is the Vice President of Operations for Mesa’s biological indicator manufacturing facilities in Omaha, NE and Bozeman, MT. He has been involved in the manufacture of biological indicators since 1998 and has held various Laboratory, Technical and Sales positions during his tenure with Mesa.

Garrett is a committee member and active participant with the Association for the Advancement of Medical Instrumentation (AAMI) in both the Biological Indicator and Resistometer working groups. He holds a B.A. in Biology from The University of Texas at Austin.