The process of validating an isolator decontamination process is discussed in a white paper by Mesa Labs (Vaporized Hydrogen Peroxide Isolator Decontamination in a World of Uncertainty), and therein, the selection and qualification of biological indicators (BIs) was covered in moderate detail. This Spore News is entirely dedicated to vaporized hydrogen peroxide (VH2O2) BIs including necessary physical characteristics of the BI unit, BI types, proper BI placement, and challenges encountered.

It is recognized that VH2O2 has poor penetration abilities; however, well-designed processes have demonstrated that it can be an effective agent for surface decontamination, provided the methods/equipment control the process within the parameters empirically proven to be effectively lethal.

The authors of a recently published paper1 demonstrated that BIs not optimized for a decontamination process can result in nearly every possible outcome when exposed to a VH2O2 cycle. The authors obtained BIs from 4 manufacturers, with each BI lot labeled for a purpose other than VH2O2 decontamination (BIs varied in test organisms and spore counts). The BIs of each type were placed into an isolator and treated to a VH2O2 process. The data presented in Table 1 is a summary of their results. (Note: The BIs in these experiments were not placed in the isolator such that they can be considered true replicates.) The data demonstrate results ranging from complete survivors with the BIs from manufacturer A to complete kill with BIs from manufacturer C and D, and fractional results in the remaining BI lot. These data demonstrate it is crucial to use BIs that provide meaningful information about the process and that have been designed for use with VH2O2.

Table 1. Summary of Data from Non-optimized BIs* Exposed to a VH2O2 Process

*BIs that were designed for purposes other than VH2O2

A BI is a system whose performance is dependent on the sum of its components. BIs properly designed forVH2O2 consist of surrogate spore formers, the spore carrier, and the primary packaging if utilized. Each of these are discussed below.

The surrogate organisms must be non-pathogenic and tracible to a recognized culture collection such as the American Type Culture Collection (ATCC). Spores of Geobacillus stearothermophilus (and to a lesser extent Bacillus atrophaeus) are recognized for use in VH2O2 BIs as they have greater resistance to the process than the bioburden. There are two strains of G. stearothermophilus in use, ATCC #12980 and #7953. ATCC #12980 is more commonly used and provides a greater challenge than spores of the ATCC #7953 strain. Spores of B. atrophaeus (ATCC #9372) are utilized to a lesser degree and provide the lowest challenge to the process of the three strains discussed. Cleanliness of the spores is critical as cellular debris and growth media components can protect the spores. Figure 1 displays two states of cleanliness of a spore dilution. BIs made from dirty spore preparations may result in tailing or irregular performance.

The spore carrier is simply the material on which the spores are deposited and is the vehicle in which the spores are delivered to their test locations in the isolator. A carrier material must not chemically react with or absorb the decontamination agent and must not impact spore viability. The majority of BIs produced globally for sterilization modalities utilize cellulose (i.e., paper filters) as the spore carrier; however, for VH2O2 processes, this material violates the above-mentioned criteria. The primary material in use today for VH2O2 is stainless steel of various shapes (Figure 2.)

The spore carrier should promote (to the greatest extent possible) the even distribution of spores across its surface. The ideal spore presentation is a complete monolayer; however, achieving this under the current recommendations (106 spores placed over a small surface area) is not possible. The edge effect, which is the piling of spores on the outer boundary of the inoculated area (Figure 3.) will always be present and is generally not a concern, provided this feature is not exaggerated.

Although VH2O2 may not penetrate well, it can certainly penetrate to some degree into smaller spore aggregates. If this were not true, VH2O2 would never inactivate a BI and would not be suitable as a decontamination agent. The use of scanning electron microscopes (SEM) can provide great detail of spore distribution on a carrier, allowing the user to make some rudimentary and subjective predictions about the BI’s performance, but it is not recommended to use this tool as part of a routine incoming inspection process. A study conducted at Mesa demonstrated the limitations of predicting BI performance based on SEM images2.

Figure 3. SEM Images of spores presented in a monolayer (left) and spore piling on the edge of the inoculum (right)

The primary packaging contains the inoculated carrier and protects it from external contamination. The requirements for the packaging material are similar to those of the spore carrier in that it cannot chemically react with or absorb the decontamination agent and must not impact spore viability. Additionally, the packaging material must be permeable to VH2O2. The primary material in use today for VH2O2 is Tyvek®, which is a commonly used packaging material for medical devices. It has been reported3 that Tyvek does increase the resistance of the BI when compared to naked (unpackaged) versions of the same BI. These studies theorize that Tyvek allows the gas form of VH2O2 to penetrate while blocking the liquid form of the agent. For this reason, the use of naked BIs with fogging or misting systems may be more appropriate as this “vapor” tends to contain more liquid of various particle sizes. 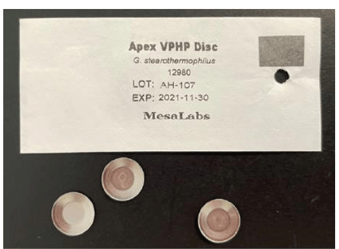 To achieve meaningful information from the BIs and avoid unexpected BI results, certain steps should be considered including selection of the BI format and placement into the system. Important characteristics of BI components have been discussed above in detail; however, there are several options concerning BI format including packaged discs, unpackaged ribbons, and Self-Contained BIs. A Spore News article4 discusses the scenarios where one BI format may be advantageous over another, as well as techniques for proper placement in the isolators. If the BIs are not positioned properly, the spores may be shielded from the VH2O2, which increases the likelihood of a positive BI result.

Perhaps the main disadvantage of BIs as compared to other indicator systems is the time-to-results. To test for spore viability after a process, the spores on the BI must be cultured and incubated. The current regulatory expectation is an incubation period of 7 days, although a reduced incubation time is possible. In comparison, the results of a chemical indicator (CI) are known immediately post-treatment, which makes them a valuable tool during the early stages of cycle development. However, despite the longer time-to-results, the BI is the only tool that can give a direct measurement of a spore log reduction (SLR) during the validation process as required by regulatory agencies.

Manufacturers of BIs for VH2O2  generally provide a “D-value” as a measure of resistance. By definition, a D-value is the time required to achieve one SLR under steady-state conditions. VH2O2 “D-values” are determined in a test isolator under stated conditions; however, these conditions are not at steady state for the duration of the process, nor do they account for all variables that occur during the process. Agalloco5 provides a detailed discussion on the physics of vapors (existing as both a gas and liquid) and the rationale for steady conditions not being met with VH2O2  processes. Certainly, SLRs can be measured under the BI manufacturer’s stated conditions, but as the conditions of the test isolator change during the cycle, the killing rate (i.e., D-value) also changes. This is true in any VH2O2 decontamination process. BI users are cautioned to not put too much weight on the manufacturer’s stated “D-value” for VH2O2 decontamination processes, if for no other reason than the manufacturer’s test isolator will perform differently than the end user’s system. Therefore, the “D-value” presented by the manufacturer should only be considered a reference value.

What exactly are “rogue” BIs, do they exist and if so, how prevalent are they in a BI lot? The term “rogue” BI was coined to describe an unexpected growth-positive BI unit that seemingly exhibits hyper-resistance to the process and is not representative of the BI lot. This growth-positive BI unit is unexpected based on previously collected data in the same test locations often leading the practitioner to conclude that it is an outlier result. Unfortunately, it is not possible to directly prove whether a BI is “rogue” either before the treatment or afterward when it results in spore outgrowth.

Unexpected positive BI results occasionally occur in traditional sterilization processes (moist heat, ethylene oxide, dry heat), but the term “rogue” BI hasn’t been used to describe these results. It seems the term was born out of the VH2O2 decontamination process. “Spores don’t lie” is the term commonly used in traditional sterilization processes and simply means that if a BI is growth-positive after treatment (barring any laboratory error) then insufficient lethality was delivered during the process as demonstrated by spore outgrowth. But then, surface decontamination is not equivalent to terminal sterilization, so perhaps “rogue” BIs do exist for these processes.

The cause of “rogue” BIs has been attributed to very low levels of BIs within a lot that exhibit poor quality in the spore presentation on the carrier (i.e., extracellular debris, spore clumping, or piling). The perfect BI lot would be one in which all spores on each carrier would exist in a perfect monolayer, which does not exist on BIs that contain a high spore density (e.g., 106 spores on an 9mm disc). However, as noted above, VH2O2 can penetrate smaller aggregates of spores as pictured in Figure 3, for if this were not true, then every BI in the lot would perform as a “rogue” BI.

Being that it is not possible to directly prove whether a BI is “rogue” either before or after the treatment, how does a user gain confidence on the suitability of the indicators prior to their use? BI lots can be evaluated as-a-whole either by the manufacturer (during the “D-value” assessment process) or by second- or third-party labs for general suitability in their process, including the presence of “rogue” BIs.

In a 2005 case study, Templeton and Hillebrand6 describe in detail their approach in addressing the potential problems with unexpected positive BI results. In part, they performed a “‘rogue’ detection test” on BIs from two suppliers. One lot showed a 1-2% "rogue" BI result while the other lot was less than 0.3%. What is an acceptable level? If the rate is 2% then perhaps the BI lot is unsuitable for use in this process, after all, can 2% of a BI lot really be considered “rogue” as they appear to represent a sizable portion of the batch. A result of <0.3% may be considered suitable for use with the knowledge that an occasional outlier is to be expected. The authors' approach of using multiple BIs at critical locations allowed them to demonstrate the necessary SLR even if/when an occasional unexpected positive BI resulted. Spore news SN044-V17 provides additional details on the use of replicate BIs.

Demonstrating the success of a VH2O2 decontamination process is certainly more complex than traditional sterilization processes. This is due to poor agent penetration, non-steady state/multi-phasic conditions during treatment, and microorganism layering on isolator surfaces and BIs. Despite these challenges, proving a defined SLR value is not only possible, but it is also the current regulatory requirement. Additionally, the use of properly designed BIs will greatly increase the likelihood of a successful validation. Although there are no standards for the manufacture and performance of biological indicators for VH2O2 decontamination processes, the details provided in this paper reflect proven and accepted practices. The biological indicator is the gold standard for measuring a spore-log-reduction as it is the only indicating system that actually contains viable spores.