Defining Boundaries: The Beauty of a Self-Contained Biological Indicator (SCBI)

The goal of a sterilization cycle is to render the load free of viable contaminating microorganisms, commonly referred to as the bioburden. One of the challenges of working with microorganisms is defining when they are viable (alive) or not (dead). In the case of sterility testing, a sample that shows evidence of growth is easy to declare a positive result, thus ending the test, (and often times triggering further testing). But if there is no evidence of growth, when is it safe to declare that all the microorganisms are dead and the load sterile?

In most cases, microorganisms are generally recognized as dead when they fail to show growth when placed in an accepted culture medium (expected to provide growth of most known organisms) and incubated at a desired temperature for a defined period of time. However, a negative result under one set of culture conditions may have resulted in a positive result had a different culture medium or longer incubation period been used.

It is important to understand the nature of bioburden, including the number and types of organisms. The bioburden can consist of a variety of organisms including spore formers which are generally more resistant to the sterilization process than non-spore-formers. In our experience, however, even these spore forming bioburden organisms are significantly less resistant than the widely recognized test organisms used in biological indicators.

Biological indicators are tools that serve a specific purpose just as a thermocouple is a tool serving a specific purpose. All tools become more valuable the better they are understood. The performance of any tool that is a measuring device must be very well understood if any meaningful data are to be acquired from it. The BI is a tool that assists in measuring the delivered lethality of a sterilization cycle. BI manufacturers test hundreds of units from each lot of BIs before defining the performance of the lot.

It is often assumed that when the BI is negative for growth under the defined culture conditions that there are not viable spores present, and in most cases this assumption is likely correct. But what if the sample were incubated for a month, a year, or for 10 years? Might not a spore with severe collateral damage repair itself and grow out? Would this imply that the sterilization cycle was inadequate? Of course not, but this illustrates the need for placing boundaries on the test system. It is certainly unreasonable to incubate a BI for 10 years, but how is one to know what the appropriate boundaries are? Fortunately for BI users, BIs are well characterized tools where the manufacturers have specified the test boundaries.

There are many different BI configurations ranging from simple spore strips to more sophisticated SCBIs. Spore strips are the least controlled BI system. The manufacturer does provide instructions for the proper use of the BI, however, the user is free to use any culture medium and incubation times he or she chooses. Additionally, the chances of having post exposure contamination are greater with strips than with a SCBI because of the aseptic manipulation required.

SCBIs are a closed system, containing both the spores and the culture medium (developed by the manufacturer for defined outgrowth). They are tightly controlled, well characterized, and have narrowly defined performance boundaries. This high level of control is made possible primarily due to the fact that the spores can only be used in the supplied culture medium. This is a critical factor for the reproducibility of performance characteristics such as the D-value, Z-value, and incubation read-out time.

Additionally spore viability in the BI is easy to interpret due to the design and instruction for use provided by the manufacturer. The characteristics of a negative unit, as well as a positive unit (generally a color change) are well defined leaving no doubts about the viability of the spores at the end of the test.

One of the most attractive characteristics of the SCBI is that they are an ideal test system for making reduced incubation time (RIT) claims. The RIT claim is simply the boundary placed on the test system, letting the users know when the test can be considered complete.

The manufacturer determines the read out time after performing testing according to a recognized protocol1 , using hundreds of BI units. The critical parameter that must be controlled by both the manufacturer and the end user is the incubation temperature. All other variables are controlled due to the inherent characteristics of the SCBI.

Bis, when cultured, are thought to have only two possible outcomes, either positive or negative for growth. This is true, but a great deal can be learned about the lethality of a sterilization cycle by the speed at which the BI turns positive.

For example, an EZTest steam BI with one hundred thousand spores will show signs of growth within approximately three to four hours of incubation. The EZTest BI subjected to a sub-lethal cycle with approximately one hundred surviving spores will result in growth within five to eight hours, and the last surviving spore will grow out within 10 hours. A few surviving spores taking 9-10 hours to grow out indicate that a significant lethal insult has occurred. Such an insult could easily destroy all bioburden organisms which are less able to survive adverse conditions than are the spores in the BL See Figure 1 for a graphic example of this. 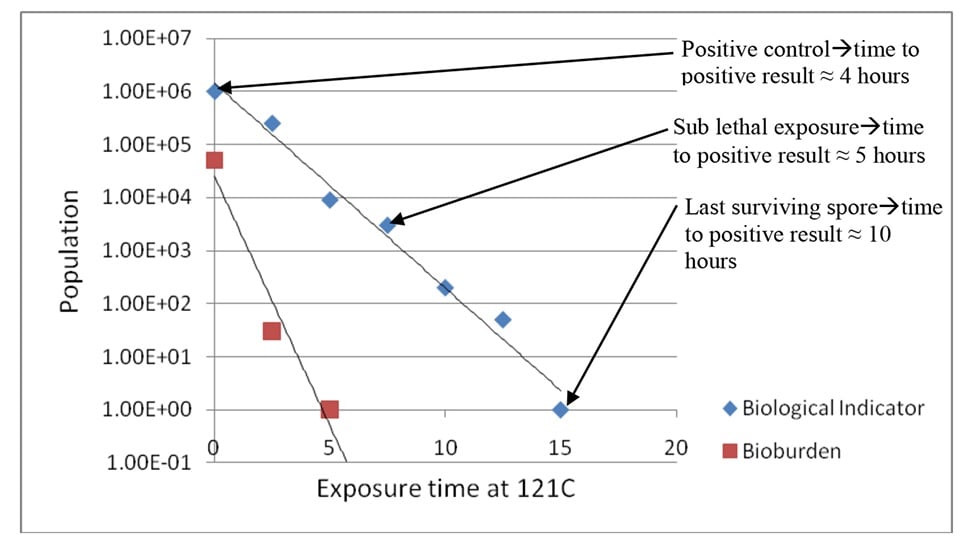 Figure 1. An example of SCBI readout times compared to a bioburden death curve

A validated sterilization cycle is generally designed to kill the Bis, therefore a positive BI indicates a problem with the cycle. However, this does not necessarily mean the bioburden has survived. For the sake of discussion, let us assume that the bioburden resistance characteristics are known and look much like that presented in Figure 1.

The SCBI provides a higher level of control than other BI systems, and in this business, it is all about control.