Air Removal from the Sterilization Chamber

When sterilizing by steam, it is imperative to first remove ambient air not only from the chamber but also from the devices being sterilized. Failure to do so will impede steam contact with all surfaces which can result in non-sterile items being used from a seemingly acceptable sterilization cycle.

There are two general means for removing ambient air from the sterilization chamber: dynamic air removal or gravity-displacement. Dynamic-air-removal sterilization cycles can be either a prevacuum cycle, in which case air is actively removed by a series of pressure and vacuum phases prior to admission of steam, or by steam-flush-pressure pulsing (SFPP) in which case a series of steam flushes and pulses of pressure are employed. Gravity-displacement is a passive means of air removal in which incoming steam displaces or “pushes” residual air out through the drain of the chamber. ANSI/AAMI ST79:2006 notes, “The dynamic-air-removal cycle is generally preferred to a gravity-displacement cycle because of more efficient air removal, a shorter exposure time at higher temperatures, and a vacuum drying phase, resulting in an overall reduction in cycle time.”

While the above ANSI/AAMI note is accurate, do not think that you must start upgrading and replacing your gravity-displacement sterilizers with new machinery. Gravity displacement is still an effective means of sterilization as long as one employs a few precautions. Such precautions are not necessary in a dynamic-air-removal process because the air is actively “sucked-out” of the chamber and load.

Without the aid of active air removal, one needs to “facilitate” removal of air from the load when using gravity-displacement systems. This is achieved by positioning items in such a manner that does not create any potential air traps. To illustrate this point, start with a simple example such as a standard laboratory beaker. Of the three orientations shown in Figure 1, which are appropriate for a gravity-displacement steam sterilizer? 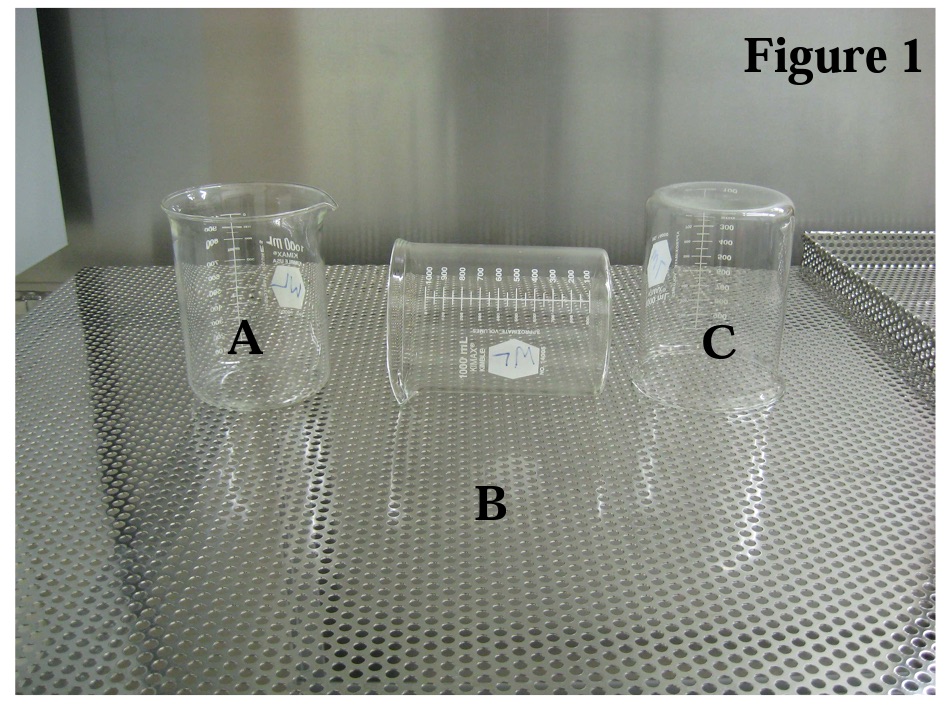 NOTE: In all of the photos non-packaged items are shown for visual clarity. In actual practice these items would be in sterilization pouches, allowing for post-exposure protection from contamination.

The answer is (B & C). The ambient air that is contained within the beaker is heavier (i.e. more dense) than the steam that will be introduced into the chamber. In the upright orientation (A), the steam will not be able to displace or push the ambient air out of the beaker because the air has no means of escape (i.e. the beaker does not have a “drain”). Note that the orientation shown for (B) does allow the air to drain from the beaker.

The next example is an Erlenmeyer flask which is a bit trickier. Review the four orientations shown in Figure 2 and decide which are the most appropriate for a gravity-displacement cycle. 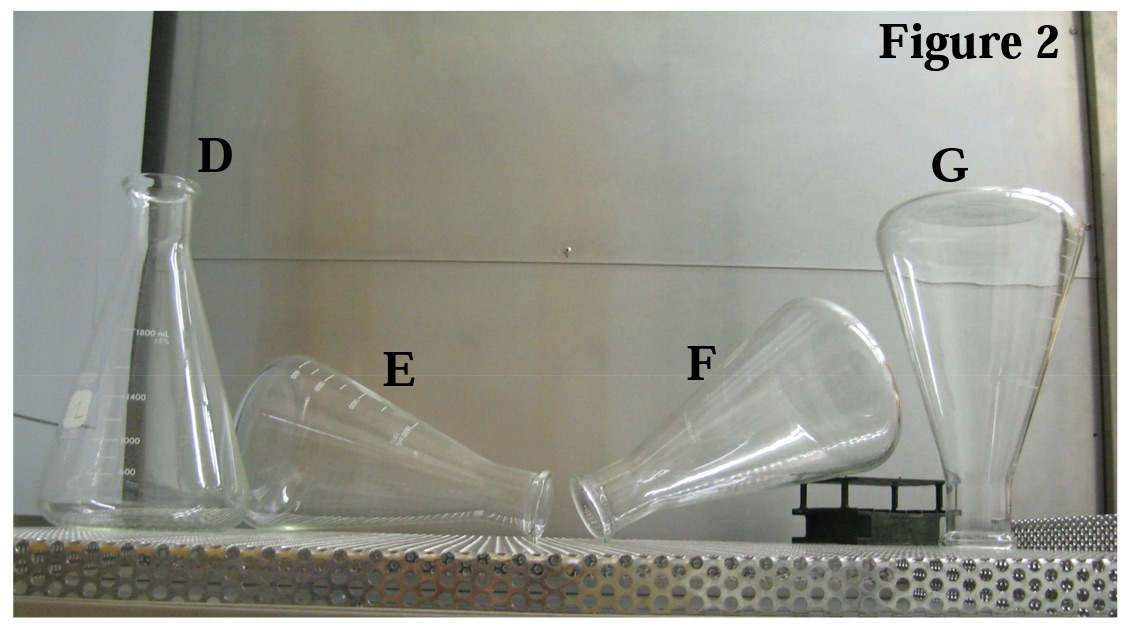 It is easy to see that (F) or (G) is the best option and (D) must be avoided. But what about (E)? This orientation is also problematic because there is a zone within the Erlenmeyer flask where ambient air will become trapped and steam contact to the surfaces in that zone will be impeded (see outline of dashed red zone in Figure 3). A very effective way to demonstrate the effects of trapped air is to run a standard sterilization cycle with three flasks oriented as shown in D, E and F (see Figure 3 below). Place an EZTest biological indicator at each location marked in the photo and incubate the units after exposure. The EZTest from locations 1 and 2 will show surviving spores while the EZTest from location 3 will have no growth. This is a perfect example to show that the parametric data for the cycle (time, temperature, and pressure readings) will indicate acceptable cycle performance but the biological indicator indicates non-sterility. 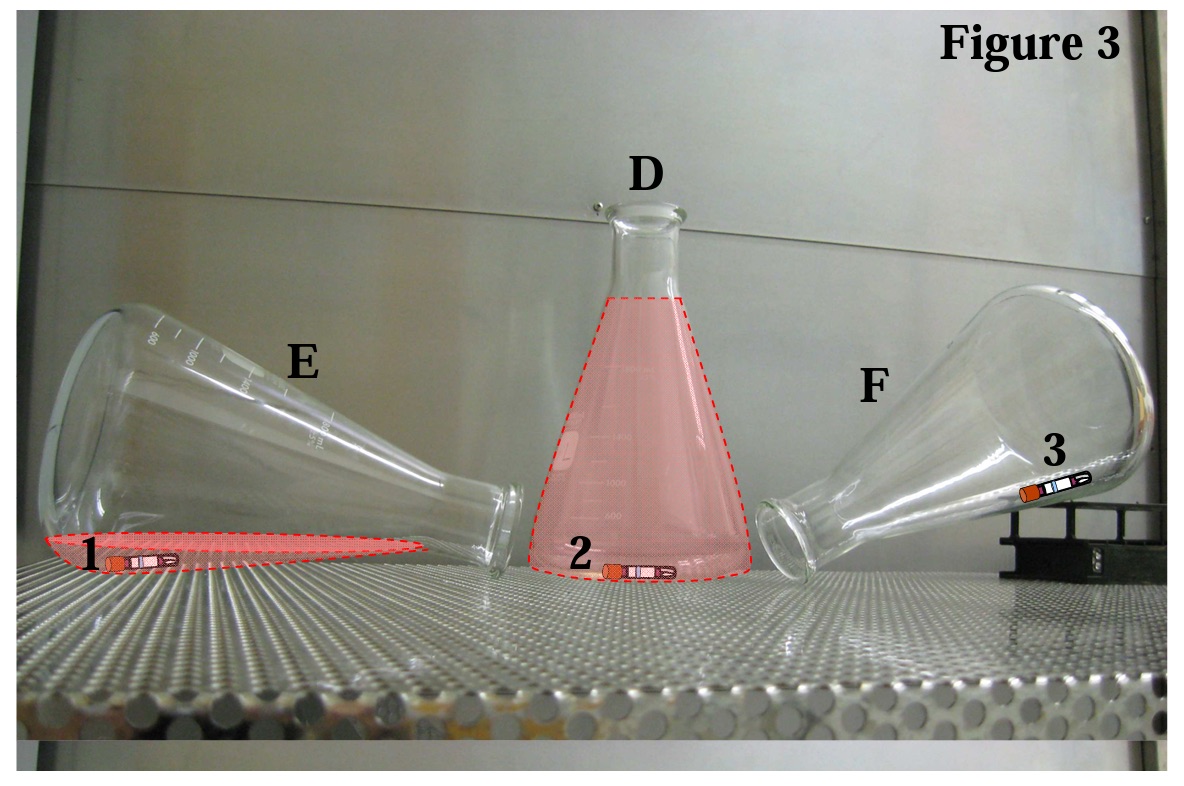 When conducting a validation several years ago, I performed the above recommended test in a 65-minute exposure. The penetration thermocouples (with attached EZTest BIs) recorded accumulated Fo values in excess of 80 minutes even from locations 1 and 2. The physical data indicated a lethal delivery that was well in excess of what was needed to kill the spore challenge, yet the EZTest from locations 1 and 2 were positive while location 3 was negative. How could the spores survive 80 Fo? The reason is the prevailing condition at locations 1 and 2 was NOT saturated steam; rather, it was 121° - 123°C dry heat. Without an escape route, the less-dense steam molecules could not displace the heavier ambient air and air pockets (dashed red zones in Figure 3) become trapped in the flasks. The penetration thermocouples recorded temperatures of 121° to 123°C for most of the 65-minute dwell time, but unlike the spores in the biological indicator, the thermocouples can not differentiate between dry heat conditions and saturated steam. When reviewing the cycle data, time, temperature and pressure were all within acceptable levels, thus indicating acceptable cycle performance, yet the spores survived. The biological results indicated non-sterility and did not agree with the physical data which indicated sterilization was achieved. We refer to this condition as a catastrophic sterilization failure. SPORES DON’T LIE® !

Air pockets within the materials being sterilized can not be detected by any instrumentation available today. The only system available to detect these pockets is the biological indicator. Air pockets occur in the “worst case” to sterilize locations in the product or load. All standards direct the user to challenge the “worst case” locations with biological indicators.

As a final example, consider the lengths of tubing shown in Figure 4. When oriented as shown in (G) multiple air pockets will form at various low spots along the length of the tube. One must carefully coil the tube in a helix shape (H) to facilitate air removal and steam penetration. 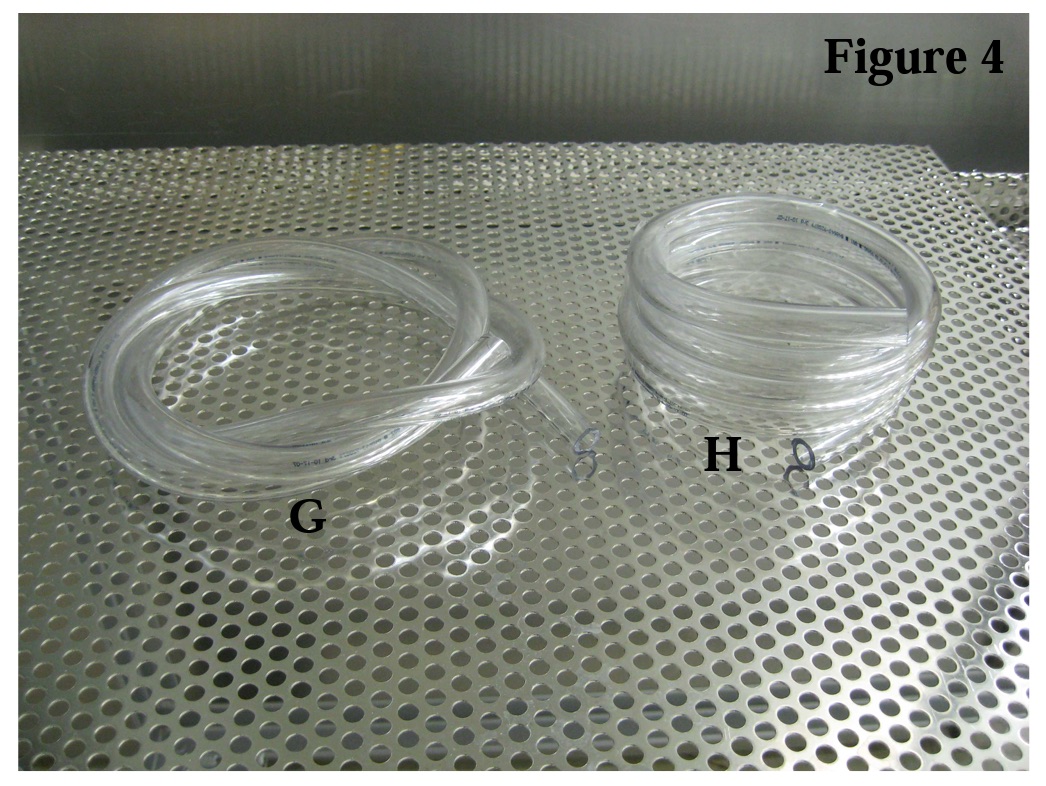 Using colored water, one can illustrate the multiple low spots that exist in (G) where air pockets will form. For Figure 5, both tubes were filled with purple water and placed on the perforated stainless tray. All of the colored water drained from (H). Compare that to the amount and location of water that was unable to escape the (G) configuration. The colored water allows one to visually discern where the trapped air will form pockets and thus, the areas in the tube where steam will not penetrate. 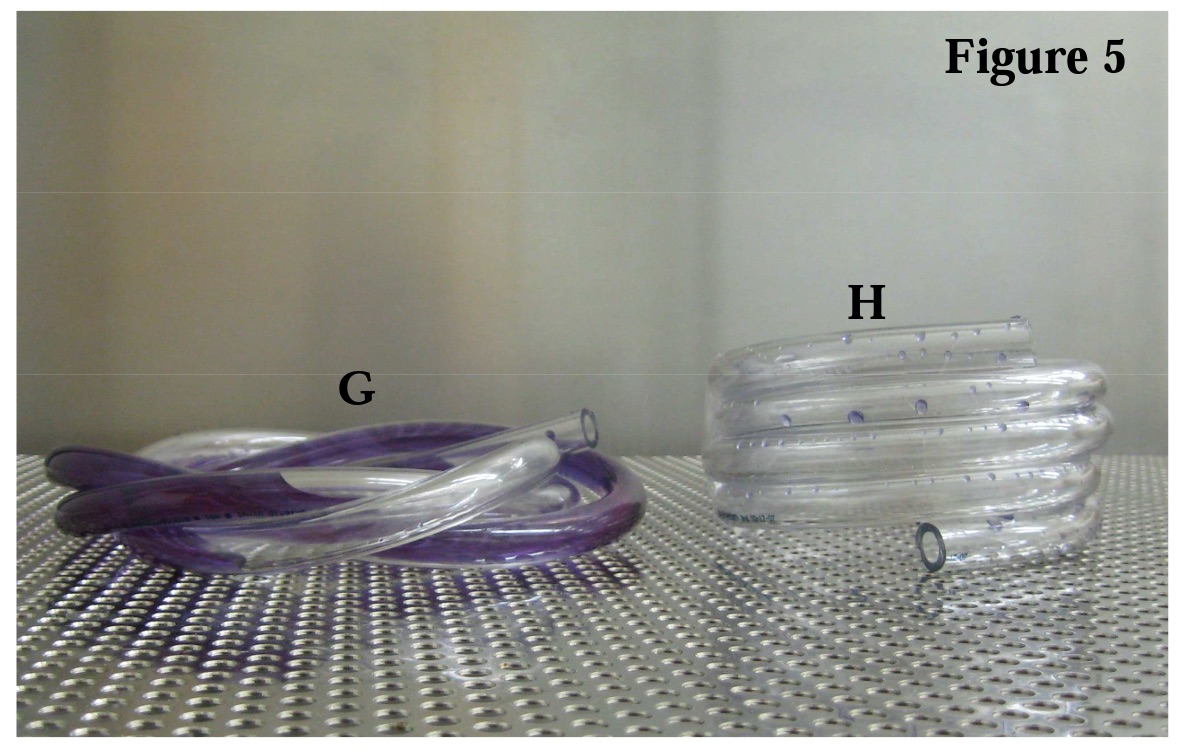 The water visualization method is a valuable tool that can be used when training personnel to use steam sterilizers. One must position items in the chamber such that if they were filled with water, the water would completely drain from the item. If any water were retained, the positioning is not suitable (as shown for the Erlenmeyer flask in Figure 6). 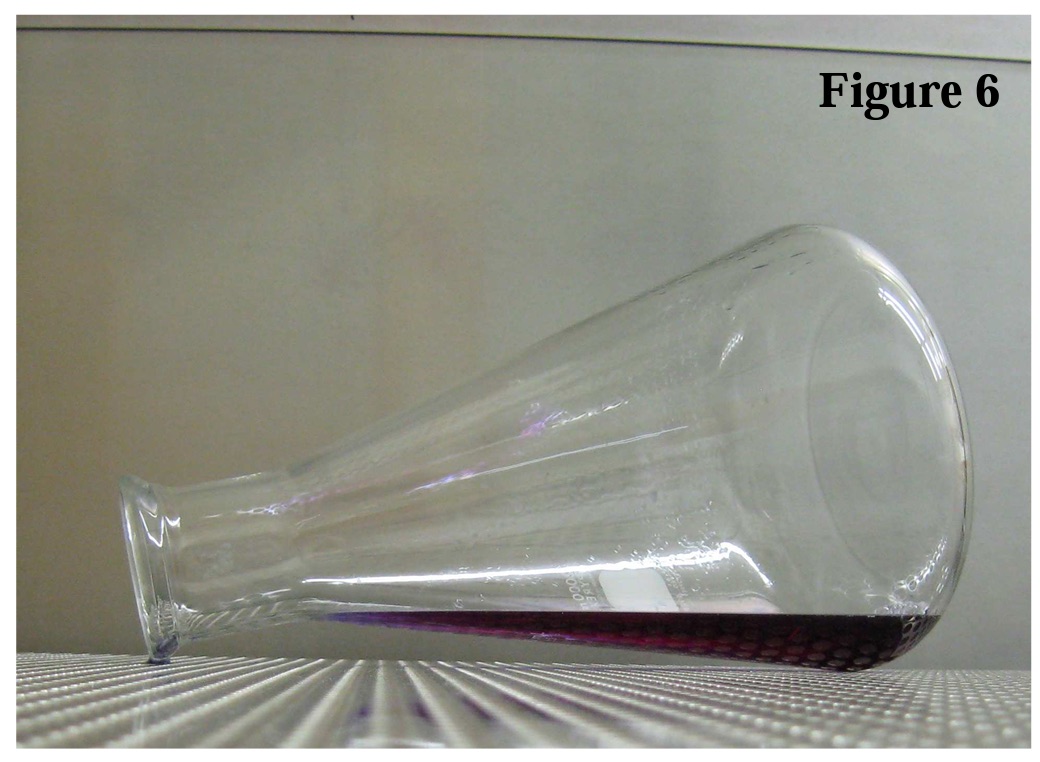 The colored water is unable to drain from the flask and shows where trapped air will collect and impede steam contact.

Now back to the original question, “Why is it necessary to place the EZTest biological indicators in a horizontal position?” The EZTest, by virtue of its design is an excellent detector of trapped air. The EZTest itself is not unlike the Erlenmeyer flask in that it too can harbor ambient air which would impede steam contact with the spores on the inoculated paper strip. Thus, just like the beaker shown in (B), this is the correct orientation for the EZTest BI.

Finally, consider Figure 7; can you see the flaw in (I) and why (J) is the preferred set-up?

Recall the earlier statement, “the EZTest itself is not unlike the Erlenmeyer flask in that it too can harbor ambient air which would impede steam contact with the spores on the inoculated paper strip.” In both (I & J) above, the Erlenmeyer flask is inverted to the extent that if filled with water, all of the water would drain from the flask. HOWEVER, in (I) the EZTest is in a slight “cap-up” orientation and if the EZTest biological indicator were filled with water, it would be trapped inside the EZTest. In (J) a slight “cap-down” orientation prevails (by virtue of the inverted positioning of the Erlenmeyer flask) and thus we have a “drain” which allows the ambient air from inside the EZTest to escape the unit.