In the August 2007 issue of Pharmaceutical Technology1 magazine, we published an article on the performance of a new design of steam resistometer produced by Fedegari Autoclavi SpA (Pavia, Italy). The performance of the vessel was evaluated using biological and parametric data (using the appropriate ISO standard2 as a guideline). The data collected in that study “demonstrated that the Fedegari vessel performs parametrically as a resistometer.”

Since the publication we have collected additional data on other organisms in the Fedegari resistometer and will report these results here. All BIs (spore strips and self-contained BIs) used in the original publication contained Geobacillus stearothermophilus spores which are known to have a high resistance to moist heat sterilization processes. We have performed testing on three spore forming microorganisms (including G. stearothermophilus), this time suspended in Water for Injection (WFI). The two other organism, Bacillus smithii and B. subtilis “5230”, are less resistant than G. stearothermophilus and have been found suitable for sterilization processes less than 121ºC or when processing heat sensitive liquids.

WFI is the base for most injectable pharmaceutical products and is a good reference material for use in performing D-value studies.

The method for D-value determination was by survivor curve following the general method described in ISO 111383. The survivor curve method involves subjecting the BIs to a series of incremental exposure times followed by enumeration of the surviving spores through the performance of a population assay. Testing was performed in triplicate on each organism in both the Fedegari and Steris resistometers.

To summarize the operation of the Fedegari resistometer, refer to the following quote from the 2007 article:

The Fedegari manufactured resistometer is a Model FOB3 steam sterilizer (140 liter) fitted with a device that allows for the rapid insertion and removal of BIs into the chamber while charged and under pressure. The device consists of a “loading-chamber”, a “guiding-tube” through the main chamber, and an “exit– chamber”. The loading chamber is positioned on top of the resistometer. The BIs are gravity fed through the vessel by the precise coordination of the series of valves. The system is computer controlled and allows the operator to program the exposure time. The system is capable of running pre-vacuum cycles by evacuation of the loading-chamber prior to insertion of the BIs into the mainchamber.

The linearity of the 18 survivor curves constructed from the data collected on each organism in both resistometers were very good with the r2 ranging from 0.9226 to 0.9992. The D-values calculated from the Fedegari generated data were nearly identical to those collected in the Steris resistometer. Figure 2 gives a graphical representation of the data along with the D-values and r2 for each survivor curve. 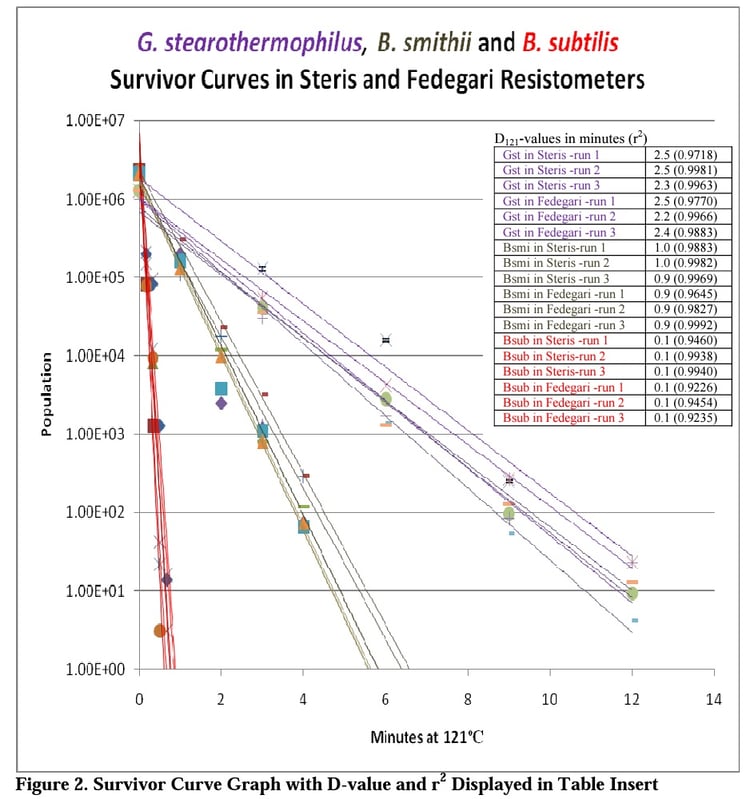 The data collected provides more evidence in support of the claim that the Fedegri vessel performs well as a resistometer. Additionally, this design may prove to be advantageous when evaluating the resistance of heat sensative bioburden organisms, due to the nearly instantaneous come up and come down times.

It is our intention to place the Fedegari resistometer into service for use in bioburden, liquid pharmaceutical, and other studies as deemed appropriate.