In the ‘Resistance Performance Tests’ section of the USP, it states to culture biological indicators (BI) ‘within a noted time, not more than four hours’ after the sterilization process1. An issue arises where the end user is unable to culture the exposed BI within the 4 hour window. In those cases, is a delay of a day, two or a week acceptable between the time of exposure and culturing of the BI?

Two studies recently performed by Mesa Labs, Bozeman Manufacturing Facility (BMF) with self-contained BIs for steam (EZTest) address this. In these studies, D-values were established with BIs cultured immediately after exposure and compared to D-values from BIs that had been held after exposure. To establish an acceptable window for comparison, D-value of the delayed incubation BI samples needed to remain within 20% of the original assay D-value. This is not the exact intent of the ISO standard for confirming D-value as indicated in ISO 11138-12, but in assaying the ability of injured spores to remain viable within a similar 20% window an acceptable measure would be established.

In the first study, units from three lots of BIs were exposed in a steam Biological Indicator Evaluator Resistometer (BIER) at 121 °C such that fractional results were obtained. Each group of 30 units was split into three 10 unit sets. One set was incubated at 60 ± 2 °C for 24 hours and scored for growth. One set was held at room temperature at the Mesa Labs, BMF facility and the remaining set of units were shipped to and returned from a distributor in France. Approximately 6 days were required for transit to and back from France. Upon return, the held and shipped units were incubated as above and scored for growth at 24 hours. As a reference, a temperature data logger was placed in the immediate area where the exposed units were stored and included with the shipment to the distributor.

Temperatures during shipping varied between 0 and 23 °C. Temperatures for the units remaining at the BMF were maintained within 17 to 23 °C over the period of the study. Shown in Table 1 are the D121 values for the three lots of BIs and treatment conditions prior to incubation.

In the second study, EZTest BIs were again exposed in a steam BIER at 121 °C such that fractional results were obtained. Each group of 40 units was split into four 10 unit sets. One set was immediately incubated at 60 ± 2 °C for 24 hours and scored for growth. The remaining sets of units were stored at room temperature at the Mesa Labs, BMF facility for 24 hours, 4 or 7 days post exposure respectively. Following the delay, BIs were incubated as previously described. Temperature monitoring was performed with a data logger placed in the immediate area where the exposed units were stored.

Temperatures during storage ranged between 17 °C and 24 °C. Shown in Table 2 are the D121 values for the three lots of BIs and hold time prior to incubation. The units for Lot “C” were held for 15, rather than 7 days before incubation due to unforeseen circumstances. 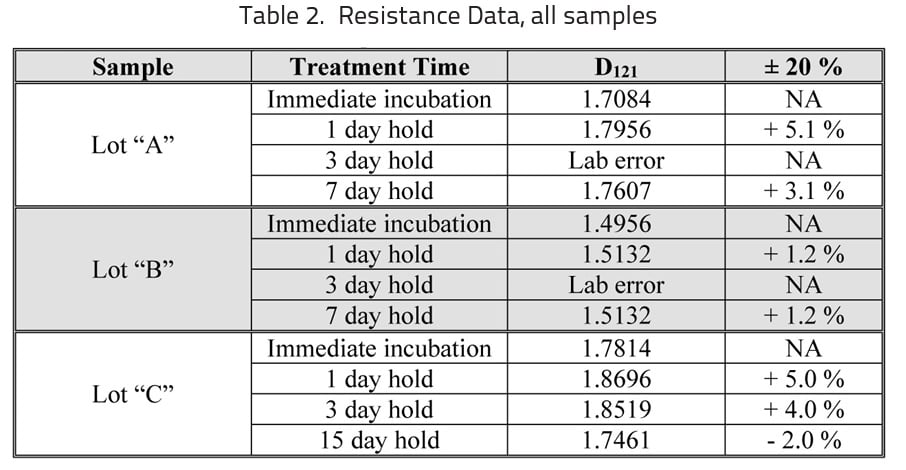 In all, these studies seem to indicate that holding and shipping self-contained BIs for up to 7 days, or possibly longer, after exposure has little deleterious effect on the survivability of spores present in the BI. One caveat is the BIs should be held under controlled conditions that mimic the storage conditions of the BIs prior to exposure. How other BI formats perform under similar conditions will be explored in other issues of Spore News.

Eric Gillitzer, Ph.D., is a Senior Research Scientist for Mesa Labs. He started in 2008 in the production area and since then has been involved in all aspects of BI manufacture and testing in the production lab, spore lab and R&D laboratories.

Eric is a member of the Association for the Advancement of Medical Instrumentation (AAMI) and a former member of the American Society for Virology (ASV) and American Society for Microbiology (ASM). Eric graduated from Montana State University, Bozeman with a B.S. in Microbiology and from SUNY Stony Brook with a Ph.D. in Molecular Biology and Biochemistry.