The D-value of a specific biological indicator is significantly influenced by the spores, but also by carrier materials, product configuration, and recovery culture medium. Spores don’t have an intrinsic D-value. Spores must be placed in or on a carrier to be tested. They need to be provided with nutrients for recovery and growth after testing. All these elements affect the measured result. Therefore, the D-value test is a measurement of the performance of the “Biological Indicator” system.

The recovery medium significantly influences measured recovery. The USP1 specifies Soybean Casein Digest (SCD) media in agar and broth forms. Variations in population recovery as well as resistance performance occur with different manufactured lots of the same media formulation from the same manufacturer. Soybeans are a natural product, therefore, the source of the soybeans as well as the particular growing season conditions all influence the nutritional quality of the soybeans. This nutritional quality has a direct impact on the ability to recover spores2 .

Shintani is quoted “if you don’t have the same medium used by the BI manufacturer to certify the product, you will not be able to reproduce the certified data.”

Figure 1 illustrates the difference of D-values between lot to lot and manufacturer to manufacturer using SCD media. Data collected by Shintani et al8. 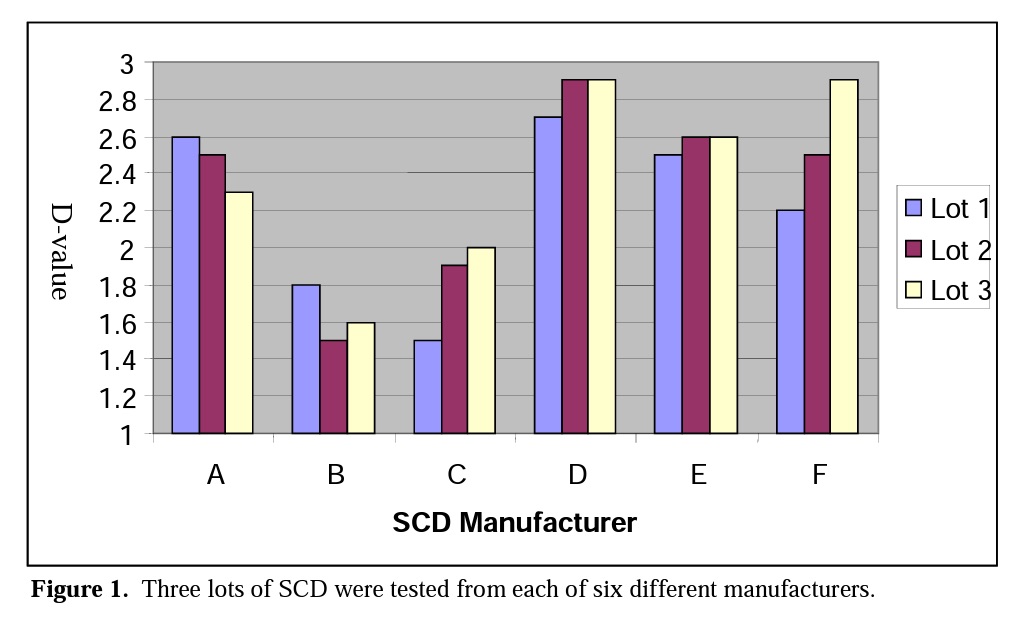 ISO 11138:19949 states that the D-value of a BI must be reproducible to within 0.5 minutes of the certified value. The above data indicate major differences between the highest and lowest recovery and between different lots of SCD from different manufacturers. The data in Figure 1 clearly shows that different manufacturers of SCD yield different performance data. The ISO requirement could be met if media used was from the same SCD manufacturer. Each manufacturer of SCD media demonstrated variances that were within the ISO D-value limit.

[6] Shintani H. and J.E. Akers, “On the Cause of Performance Variation of Biological Indicator Used for Sterility Assurance,” PDA Journal of Pharmaceutical Science and Technology, Vol. 54, No. 4, JulyAugust, (2000).

[8] H. Shintani and K. Sasaki, “On the Difference in Attaining Sterility Assurance Between Lots and /or Manufacturers of Soybean Casein Digest Culture Medium,” J.Antibact. Antifun. Agents, 27, 145-151 (1999)

Figures 2 and 3 illustrate the differences Mesa labs observed with spore population recovery of G. stearothermophilus and B. atrophaeus using three lots of SCD media purchased from the same manufacturer. 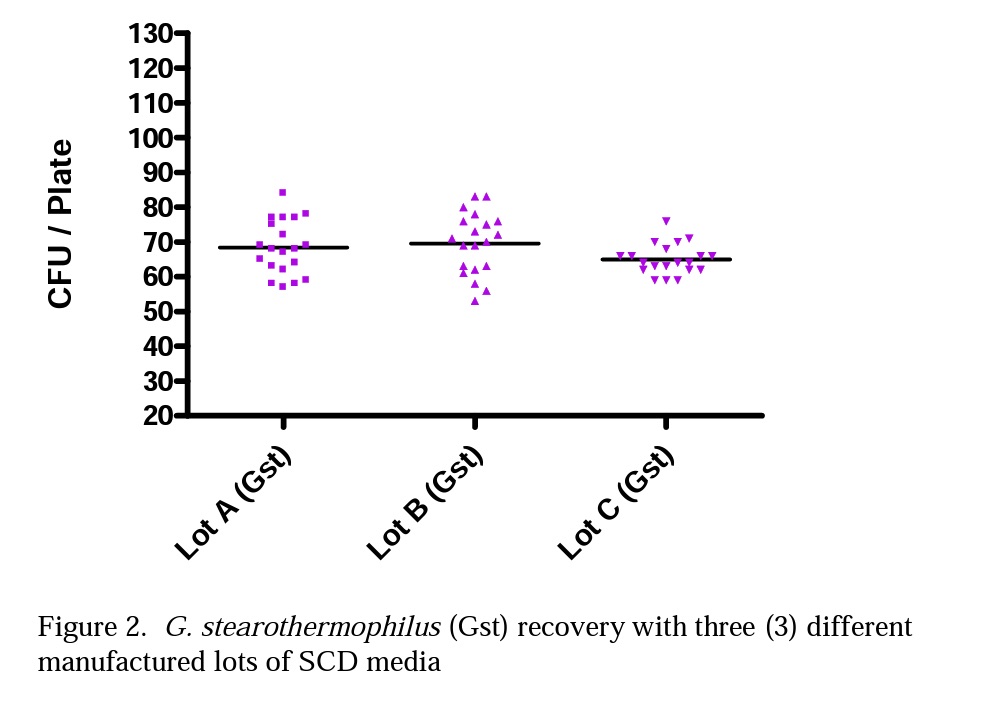 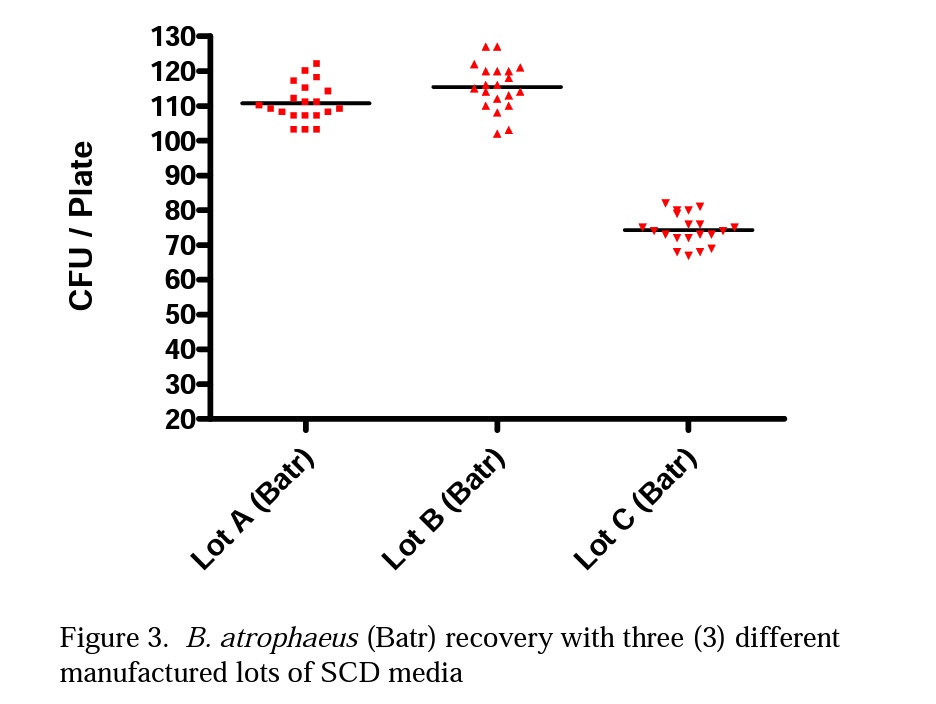 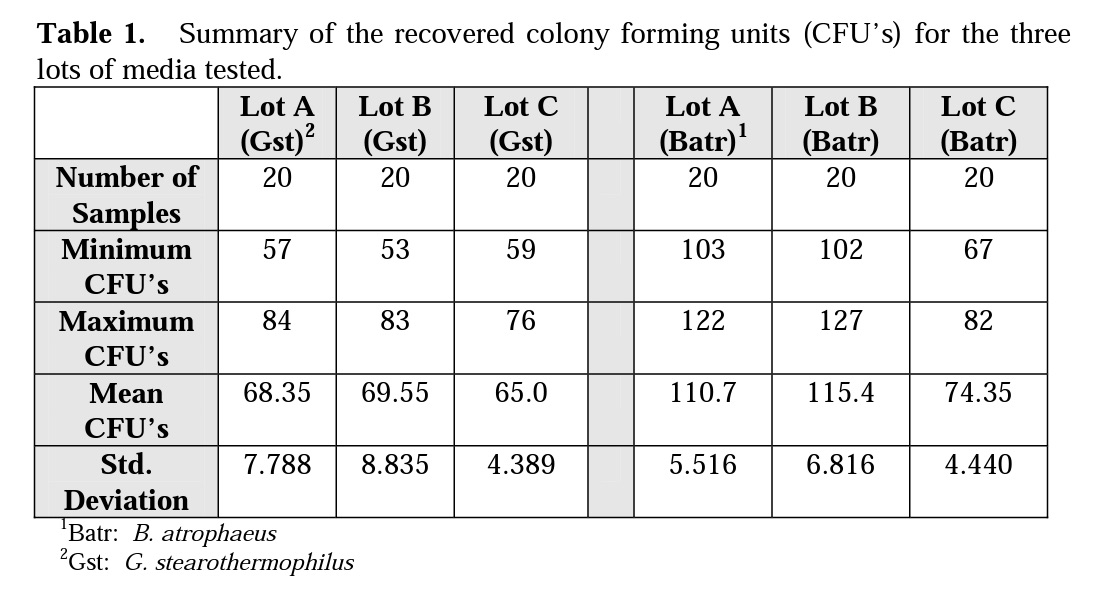 USP specifies SCD medium as a general guidance, but it is only the beginning of the manufacturer’s medium controls. Mesa controls these media “differences” by offering a number of self-contained BIs (EZTest®, MagnaAmp®, and SterilAmp®), which provide exactly the same spore recovery medium as that used for performance data. Mesa also offers Releasat® culture sets for EO, which include the same tubed media used for the performance data of the MesaStrips®.

10Mesa offers bottled SCD media and a Population Assay Kit that provide all the supplies necessary to duplicate the spore population assay. These products provide our customers with the same supplies and culture medium used by Mesa when performing spore population determination. Differences in the nutritional quality of culture media significantly influence not only the spore population recovered, but also the measured performance of the spores. This difference is impossible to predict or detect. It only becomes apparent when experimental data indicates a result that was different than expected. It is not easy to explain the aberrant results. Mesa is making available to our customers the same media used in our testing. Our goal is to have it available for all products in the near future.