Perceived issue: The customer reports that the BI was already turning positive upon removal from the sterilizer

Solution: Educate the customer regarding the use of negative controls

All biological indicator (BI) products work in the same general manner – the BI is exposed to the sterilization cycle, activated or cultured such that the spores are now in contact with the culture media and incubated at the appropriate temperature specific to the spore species. The MagnaAmp, SterilAmp, ProSpore (1 and 4ml) and ProAmp products are simply incubated as the spores are already suspended within the growth medium. If any viable spores remain in the exposed BI, those spores will germinate into their vegetative state as they now have a source of nutrients and ideal growth temperature. Using the carbohydrates in the media, the vegetative cells produce acidic metabolites which cause a drop in the pH of the media as they accumulate. The drop in pH causes a shift in the pH indicator and thus the visual confirmation of a failed sterilization cycle. It only takes one surviving spore the change the color of the growth media. However, even with a gross-failure in sterilization where many viable cells remain in the BI, the onset of color change would still require a couple hours of incubation time in order to be detected. 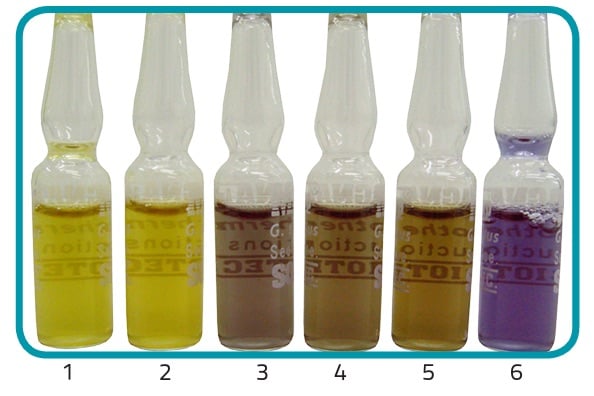 After much discussion it was noted that this customer did not expose the negative control ampoule in the sterilization cycle and was simply comparing the unexposed negative control to the exposed BI resulting in an obvious color difference. See Spore News Volume 8 No. 3 for additional information on this topic.

Case # 2: Are You Positive it’s Positive?

Perceived issue: The BI turned yellow but there are no spores present after sub-culturing.

The biochemical processes going on within a positive BI mimic what is depicted on a standard growth curve chart. Initially the cells proliferate very quickly however as the nutrients are depleted growth slows down to the point where an equal number of cells are becoming non-viable as new cells are being produced (‘‘stationary phase” depicted in Figure 2). Due to the accumulation of acidic metabolites and the depletion of available nutrients, the cells start to die as the environment becomes toxic from their own metabolic waste. 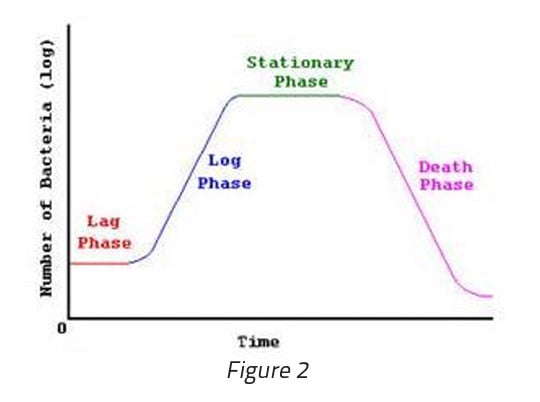 It is for this reason that sub-culturing of a positive BI be performed immediately upon noticing that the unit is positive. In the case with this customer, the positive was noted at 24 hours however, the unit continued to incubate for 72 hours and was not sub-cultured until that time. When plated on a trypticase soy agar (TSA) plate and incubated, no colonies were found. This was due to the fact that viable cells were no longer present within the media.

Perceived issue: The BI was positive initially (yellow) but then turned negative (pink) with extended incubation

Solution: Educate the customer regarding ‘reversion’

As previously stated, all biological indicators are used in the same general manner – the BI is processed, activated or cultured and then subsequently incubated at the growth range conducive to the specific spore species. With most bacterial species, initial germination and proliferation is due to the carbohydrates (sugars) present within the growth media which provide an energy source. The by-product of carbohydrate metabolism is acidic. Some species also have the ability to metabolize protein as an energy source; the by-product of protein metabolism is basic. The spore species present within our EZTest Gas product is Bacillus atrophaeus which has the ability to metabolize both carbohydrates and protein. Simple sugars are much easier to metabolize. Thus, in an environment where there is ample carbohydrate and protein available, the microbes will always metabolize the carbohydrates first.

In the case with this customer, spores did survive the cycle, germinated and the resulting cells initially metabolized the carbohydrate in the media – hence the yellow color of the media signifying a positive unit. With extended incubation and the carbohydrates depleted, the cells then started to metabolize the proteins within the media, resulting in the media becoming basic. The media initially changed from yellow to reddish orange (which is the original color of the media within this product and would normally signify a negative result) and progressively turned to a magenta or bright pink color. Close examination of the media at this point should confirm turbidity or growth within the ampoule as well.

We have engineered our media formulations to provide ample carbohydrates such that in most cases the cells die from the decrease in pH prior to reverting to protein metabolism.

Case # 4: Subtilis is a ‘Sensitive’ Issue

Perceived issue: ‘“Something is wrong with the BI – it turned positive during my sterilization cycle.”

Solution: Educate the customer on the sensitivity of Bacillus subtilis

The SterilAmp ‘5230’ product was developed for customers who were needing to monitor the sterilization of liquids at temperatures less than 121˚C. Typically customers using this product are performing sterilization cycles in the 105-118˚C range. The spores inoculated within these units are from the species Bacillus subtilis ‘5230’ ATCC 35021. The optimal growth range for this species is 30-39˚C. This is the temperature range which provides for the fastest germination of the spores and proliferation of the cells. However, the growth range in which the spores still have the ability to germinate and proliferate (albeit at a slower rate) widens to approximately 15-50˚C. Maintaining a storage temperature of less than 15˚C (59˚F) is therefore critical in order for this product to remain stable and to provide a spore challenge when used in sterilization cycles. If temperatures above 15˚C are reached for any significant length of time, the spores will start to germinate - rendering the product useless as vegetative cells have no significant resistance to sterilization processes.

What was determined with this customer is that the BIs were being placed into the liquid to be sterilized and part of the pre-conditioning phase within their cycle was a hold time at 40˚C. With this temperature within the growth range for this species, the spores did in fact germinate during this hold period and the resulting cells proliferated causing the media to turn yellow. The now vegetative cells having lost any resistance characteristics were killed when the temperature increased to 115˚C during the exposure phase of the cycle. So in fact the BIs would have appeared positive however, would not have provided any sterility assurance of sterilized liquid.

Perceived issue: Upon incoming inspection of this lot customer performed 16s rRNA identification of the spores. The spores were identified as Bacillus vallismortis and not Bacillus atrophaeus.

Not only is the traceability of our spore crops maintained, a poly-phasic approach when confirming identity prior to the manufacture of our BI products is also used. The source of our crops is obtained from a recognized culture collection with each spore crop being traced back to that specific source. Phenotypic confirmation by performing recognized biochemical tests, growth range testing and visual verification of colony morphology are also performed. In addition, genotypic confirmation of identity is obtained by having 16s rRNA analysis performed.

The biochemical tests are very unique for the Bacillus atrophaeus species such as the ability to produce brown/ black pigment on agar containing Tyrosine and the ability to produce orange pigment on agar containing dextrose. Every species has a specific biochemical ‘fingerprint’ which is unique when compared to similar species. With most bacterial species, this fingerprint is used to support the 16s rRNA identification results as this is the primary means of identification. However, when identifying the mesophilic spore-forming species – the exact opposite is true and the genetic information supports the distinct biochemical results. Bacillus atrophaeus and other mesophilic species are so very closely related genetically that only 1 or 2 base pairs differ within the 500 base pairs sequenced when 16s rRNA is performed. For this reason, the genetic report may provide confidence only to the genus level and may list several species (including Bacillus vallismortis) as possible matches.