How Long Should BIs be Incubated?

Reduced incubation time (RIT) for BIs has been a subject of debate for more than thirty years. The U.S. FDA published a guideline for determining an incubation time of less than seven days about 25 years ago. No other guidance has been offered by any other regulatory agency. U.S. manufacturers have complied with the U.S. FDA guidance protocol since it was issued. In today’s global market this protocol is not accepted by many notified bodies that audit end users. These notified bodies continue to be adamant that seven days is required; there has not been one presentation of data to support the “requirement”. These agencies desire a protocol that is different from the FDA protocol because they are not “regulated” by FDA positions.

The ISO 198/WG4, Biological Indicators working group has initiated a new work item to address this issue with the intent of drafting a guidance document that will be acceptable to FDA as well as other regulatory authorities.

Mesa is well aware of the turmoil created in the industry by regulatory auditors that have decided to make their own requirements since this void exists in the international market. Therefore, Mesa has taken the lead to collect data on actual stressed BIs to illustrate “what really happens” during incubation. We hope this data will assist the global community in the development of a meaningful guidance, supported by published data that will be widely accepted by regulatory agencies including the U.S. FDA. This will not be easy, but we believe that it will be easier when data is available for sound statistical evaluation.

The data in Figure 1 is summarized from a presentation to the AAMI ad hoc RIT committee and also to the ISO 198/WG4 BI working group meeting in Berlin (June 2009). We intend to publish this data in its entirety in the near future.

It must be emphasized that biological indicators are well characterized test systems. The spores are derived from defined culture collections. ISO standards indicate what performance is expected from specified populations. These standards also require the manufacturer to demonstrate the carrier and packaging materials have no adverse effects on the spores. The recovery media has been well characterized regardless of the BI configuration (i.e. spore strip, self-contained or media ampoule). The RIT test does not deal with the variables encountered in a “sterility test” that has unknown populations of microorganisms, of unknown identity, of unknown specific culture requirements and with unknown resistance to the mode of sterilization applied. In such a test every possible opportunity must be given to the unknown microbial challenge to express itself as positive for growth under the supplied conditions.

Figure 1 indicates the grow out pattern for self-contained BIs containing Geobacillus stearothermophilus spores exposed to sublethal steam sterilization processes. The maximum incubation time for BIs was seven days. The following assumptions were made when presenting this data:

The most probable number (MPN) of spores per BI from quantal zone exposures (positive and negative BIs from the same set) was calculated using the Halvorson Zeigler equation1. The grow out figure is presented in relative time (not clock time) because this is intended to be a generic model. The model was derived from G. stearothermophilus and the moist heat process but it may be applicable to BIs containing Bacillus atrophaeus used in both dry heat and ethylene oxide processes. The model may also be appropriate for G. stearothermophilus exposed to hydrogen peroxide processes. Further data will be collected on these other BI systems.

Positives were scored when the pH shift from a purple to yellow color was observed.

Figure 1 illustrates the relative grow out time based on spore numbers remaining on the BI. The dotted vertical line illustrates the RIT threshold when tested according to the FDA RIT protocol which requires 97% of the seven day growth-positive data. Graphically this appears to be a VERY conservative approach. 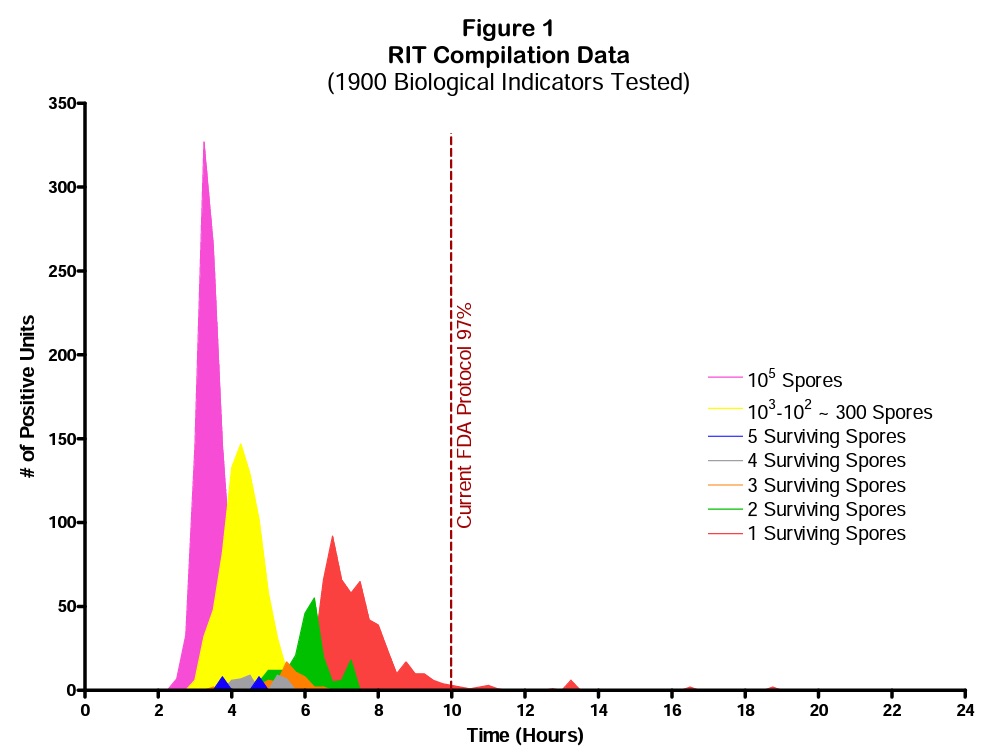 There are two applications of BIs for the sterilization process:

In both of these applications, the detection of the last surviving spore on the last BI to turn positive is not relevant. The reason the last surviving spore on a BI is not relevant is because the majority of processes monitored use more than one BI for each cycle. The process is rejected when the first positive BI is observed. I know of no manufacturer of sterile products that specify that “X” number of positive BIs is acceptable, but “X + 1” positive BIs results in a rejected cycle.

When a positive BI is observed in routine monitoring of a validated process, there is a high probability the positive BI has many spores not just one severely injured spore.