By Garrett Krushefski and updated by Mesa staff

A long time user of our EZTest® steam biological indicators (BI) recently began to hydrate and sterilize their own growth media in-house. They had been purchasing prepared media from a supplier but initiated this change as a cost savings measure. The instructions on the bucket of powdered media read, “Autoclave at 121°C for 15 minutes.” The customer prepared three batches of media to perform their sterilization cycle development and validation exercises and the following results were obtained. All BIs were growth-negative when observed at the conclusion of the 24-hour incubation period; however, the bottles of media had rampant growth in them after three days of storage at room temperature.

At Mesa Laboratories we are fond of the statement “Spores Don’t Lie”. Did our customer just prove us wrong? Did the spores in fact tell us a lie? As is typical for situations such as these, assessment of the problem starts with questions. The following is the list of questions I posed to the customer and their responses in italic font. Review the following and see if you can determine what would cause the spores in the BI to be killed yet the media is clearly not sterile.

Q2: What is the cycle time and temperature? A2: We set the autoclave according to the instructions provided on the bucket of powdered media…121°C for 15 minutes.

Q3: What is the lot number of the BIs that were used and describe the position of the BIs in the load? A3: BI lot number is S-407. BIs were placed in the cold spot…front of the autoclave just above the drain line.

Having received the answers to the questions, I’m confident that our spores are still honest…no lying here. Let us start with BI lot number.

S-407 is a lot number for EZTest BIs and when sterilizing liquids in a steam autoclave, we must use a liquid-submersible BI. As mentioned earlier, this customer was a longtime user of our EZTest steam BIs and having an ample supply in the laboratory, they had assumed that EZTest was an appropriate BI for a liquid load as well. In this particular case, the customer placed the BIs in the chamber in an area they believed was the slowest-to-heat zone…in the front of the chamber, just above the drain line. The spores were killed because the EZTest were placed in the chamber where they would encounter direct steam contact throughout the entire cycle, including the come-up time, the 15-minute cycle hold time, and the long, slow exhaust phase used when sterilizing liquids. The liquid in the containers will not have direct steam contact. Instead, the steam molecules in the autoclave will condense on the colder Pyrex® containers and transfer their energy to the glass. This transfer of energy causes the glass to heat and in turn, the media will also begin to heat.

One might ask, if the steam insult is sufficient to kill the spores in the EZTest, why is the media not sterile? The prevailing conditions in the chamber environment are VERY different from the conditions of the liquid media itself. Liquid masses will have a lag-time-to-temperature and the amount of lag will be longer as liquid mass increases. Figure 1 shows a graph that was constructed using actual temperature data from penetration thermocouples. While the liquid fill volumes represented in Figure 1 differ from that of our customer, the graph is effective at demonstrating the lag-time-to-temperature phenomenon as compared to the chamber conditions. The graph also shows why a liquid-submersible BI must be used to monitor these types of loads; MagnaAmp® would be the ideal choice. An EZTest placed in the chamber is monitoring chamber conditions and is not indicative of the liquids we are actually trying to render sterile. Only a liquid-submersible BI suspended in the liquid mass will provide an accurate indication of media sterility. 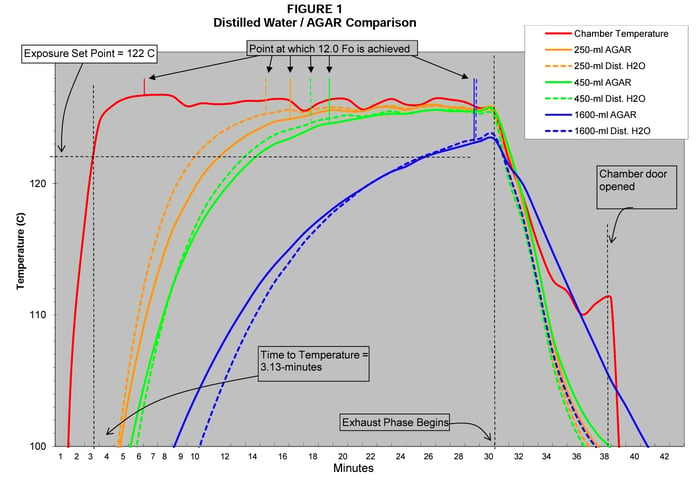 Now let us consider the autoclaving instructions provided on the bucket of media which read, “Autoclave at 121°C for 15 minutes.” This statement might be accurate if we specify that this condition (121°C for 15 minutes) is referring to the temperature of the media itself and not to the chamber conditions. I believe a more accurate statement to guide the user would be either: “Achieve a media temperature of 121°C and hold for 15 minutes” or perhaps, “Sterilize media until a lethality of 15 F0 is achieved as indicated by penetration thermocouples.”
My final concern is the array of volumes the customer tried to process in the same load. Again, refer to Figure 1 and notice the vast difference in sterilization time needed for the various fill volumes. A lethality of 12 F0 was achieved at ~16.5 minutes for the 250ml agar sample whereas ~29 minutes were required to achieve the same lethal delivery to the 1,600ml agar sample. Mixing volumes is acceptable if the difference in volume is not substantial. However, if our customer develops a cycle that is sufficient to sterilize the 400ml mass, the 1,800ml mass will likely not be sterilized. If a longer cycle is developed such that the 1,800ml mass is sterilized, the 400ml mass will risk being “over-baked.” A better approach is to keep liquid fill volumes similar and develop two (or more) distinct sterilization cycles; a shorter cycle that will render small volumes sterile and a longer cycle that can be used when sterilizing larger volumes.
To review, the problems were fixed, and the customer was able to properly validate their media sterilization cycles by implementing the following: 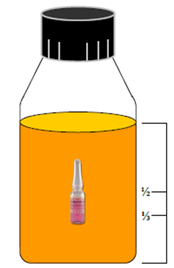