The benefits of gaseous low temperature sterilization methods are many as plastics and rubber items may be damaged in higher temperature steam processes and metal items may corrode or be dulled with repeated steam sterilization. Hydrogen peroxide is one lower temperature gas alternative. It is extremely efficient with very low concentrations of this gas having effective killing properties but it is limited to the sterilization of surfaces only due to the non-penetrating ability of the gas molecules. Ethylene oxide (EtO) gas is also a very widely accepted sterilant but it too has limitations. EtO in its purest form is a very hazardous substance. Its pleasant sweet aroma can be very misleading as it is flammable at room temperature, mutagenic and carcinogenic. EtO sterilizes by alkylation or the addition of an alkyl group onto molecules, the EtO replacing the hydrogen which are needed by living organisms in order to sustain life. The EtO therefore prohibits normal cellular functioning by affecting macromolecules such as proteins and DNA.

The Clean Air Act will prohibit the manufacture or sale of the Oxyfume 2000 gas blend in the United States after January 1, 2015 and at this time, only 100% EtO will be available for use. In preparation for the discontinuation of the Oxyfume 2000 blend in 2015, we again conducted a study to compare resistance data for BIs tested in our EtO resistometer with the Oxyfume 2000 blend compared to 100% EtO (canister) gas. This study was performed with three lots of self-contained biological indicators (SCBIs) from three different manufacturers and two lots of paper strip BIs packaged in glassine envelopes from two different manufacturers.

®Oxyfume is a registered trademark of Honeywell International Inc.

The data from this study indicate that the delivery of lethality is quite different for these two supply gases. Despite the 600 mg/L test condition employed for all exposures, the resistometer cycles run with the 100% EtO canisters had a higher lethality. As we can see in Table 1, the D-values for the BIs were 25% to 50% lower when the 100% EtO canister was used as the gas supply. 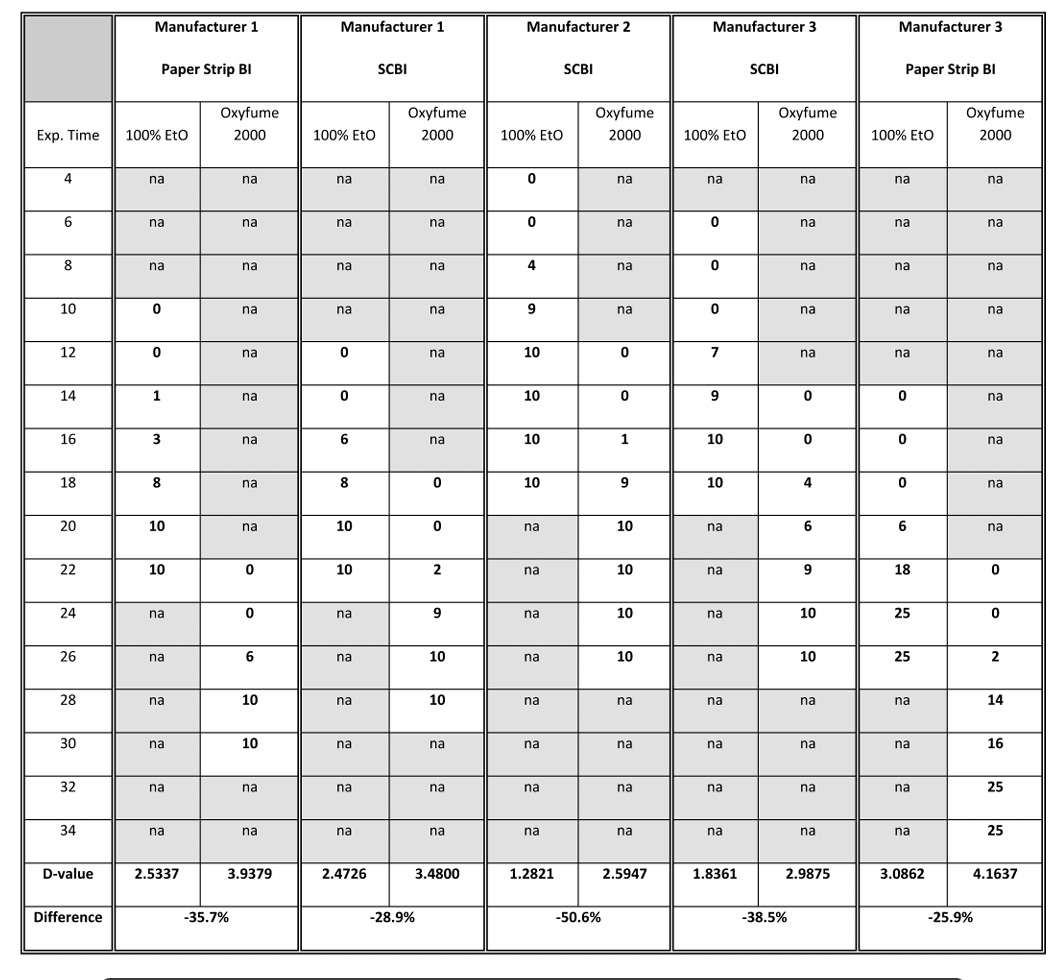 The differences in measured D-value are cause for concern if one considers the current published standards regarding EtO BI resistance. Table 2 shows the published resistance values for EtO BIs from USP, ISO and EP.

TABLE 2. The requirements for BI D-value when tested in EtO.

When comparing the D-value results to the standards, two out of the five D-values calculated for BIs processed in 100% EtO would have been unacceptable and the other two of the remaining three barely pass at 2.53 and 2.47 minutes.*

*D-values are rounded to one decimal for label claim.

It is unknown what caused these significant differences in D-value as the EtO resistometer was programmed to deliver the same concentration of EtO regardless of the source gas. We speculate that with the Oxyfume 2000 and Oxyfume 2002 gas blends, the HCFC-124 and HCFC-22 competed with the EtO molecule for critical spore binding sites. This resulted in less alkylation of the molecules within the spores therefore decreasing the lethal insult delivered in the cycle when compared to the 100% EtO.

NOTE: If any of our readers or other BI manufacturers have experienced similar (or contradictory) results to what we have reported here, we would welcome and appreciate your commentary.

Kellie Matzinger has been an employee at the Bozeman, Montana Mesa Manufacturing Facility for 11 years. Her first 10 years were spent leading the efforts in the Spore Laboratory where she routinely cultivated bacterial spores for use in biological indicator products. In April of 2011, Ms. Matzinger made the transition into the Scientific and Technical Services Department where she currently provides technical assistance and support to customers regarding biological indicator selection and use.