When you go into a restaurant for breakfast your server may ask you “How do you want your eggs?” Your choices are to have them cooked in the shell (soft-boiled or hardboiled) or out of the shell (poached, sunny side up, over easy, over hard, or scrambled). So what does this have to do with D-values? The egg shell is analogous to the glassine envelope of the biological indicator (BI). If the egg is cooked in or out of its shell, the time to achieve the desired result will be different. The same is true for the inoculated spore strip if it is removed from the glassine envelope and processed naked.

The BI is a system that includes:

We occasionally receive requests from our users to perform a D-value on the naked spore strip, removed from the glassine envelope. We don’t recommend this practice. It should be understood that spores do not have an intrinsic D-value. With today’s technology there is no way to test spores suspended in space. The spores must be placed in or on a carrier as a necessary convenience of exposing and recovering them to determine the lethal effects delivered by the process. The carrier has an influence on the observed resistance of the bacterial spore. Any packaging that is placed around the carrier will also impact the observed D-values. ISO 14161:2000, paragraph 5.2 reads, “The strain, the production method, the suspension fluid, the carrier, and packaging materials all affect the resistance characteristics of the finished product.”

Dr. Irving Pflug discusses a phenomena which is now commonly referred to as “the envelope effect” on the carrier in his book “Microbiology and Engineering of Sterilization Processes”, thirteenth edition, 2008. Dr. Pflug emphasizes that the spores plus a carrier plus a glassine envelope constitute a system. It is the system that is evaluated when a BI is tested.

Mesa has performed experiments using glassine-packaged and naked strips directly exposed in steam and ethylene oxide (EO) Biological Indicator Evaluator Resistometers (BIER). The naked strips exhibited a higher D-value than that observed in the envelope when exposed to steam. The opposite trend was observed for EO testing.

This data clearly indicates that each specific configuration which includes spores plus carrier plus package is a unique system and will exhibit unique observed resistance performance. The resistance of an embedded naked spore strip in a medical device does not compare to, nor have any relevance to the resistance value that would prevail for the naked strip (or the glassine packaged strip) exposed in a BIER. The device carrying the naked spore strip becomes part of its own unique system. This system will have its own unique resistance. Addressing this subject, ISO 14161:2000, paragraph 7.2 states, “Placement of the biological indicator either within the product or within the load is likely to alter its apparent resistance characteristics in comparison to the resistance noted on the labeling of the biological indicator.”

Still not convinced? Considering the following study in which naked spore strips inoculated with 2.9 X 102 Bacillus atrophaeus spores per strip were inserted into the manifold set at the locations identified in Figure 1. When tested in a BIER, the naked strip D-value was 0.4 minutes; the glassine packaged D-value was 3.2 minutes. 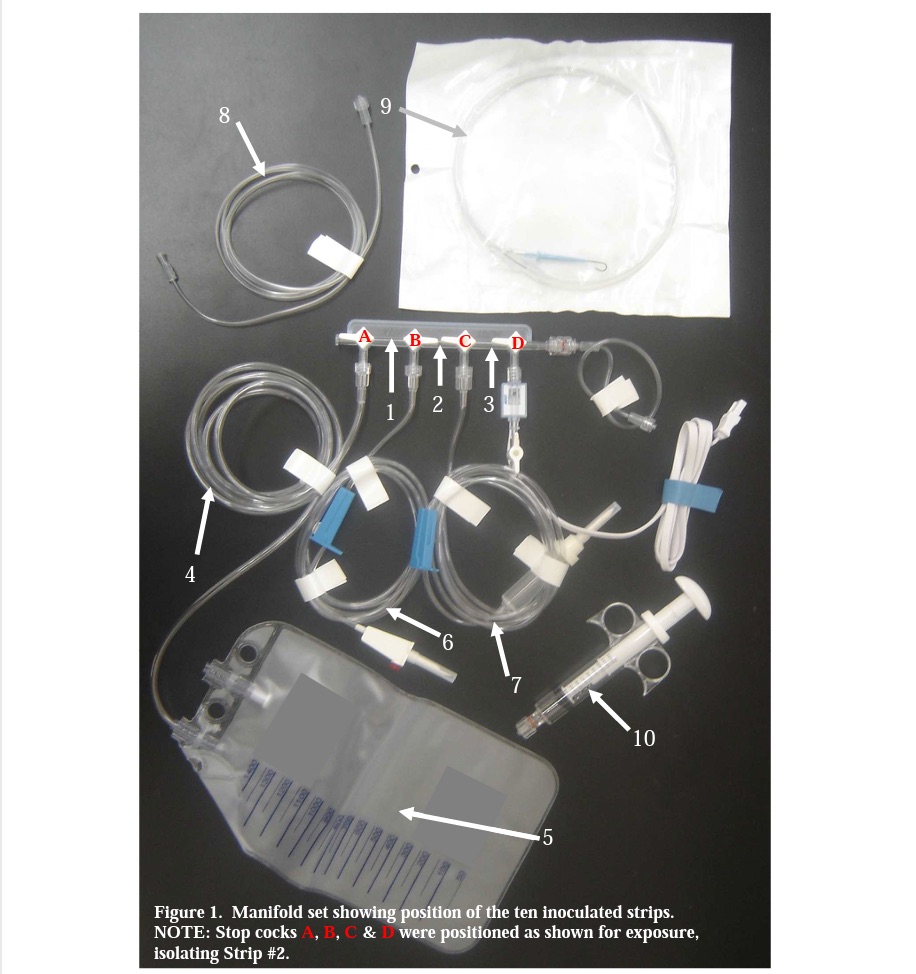 Recall that the D-value for the naked test strips was 0.4 minutes and the glassine-packaged D-value was 3.2 minutes. Which is more relevant to the customers intended use in the angiographic set? NEITHER!

If neither D-value has relevance, why test D-value at all? In such circumstances, the labeled D-value on the Certificate of Analysis can only be used as a bench-mark means for comparing lot-to-lot differences in future product received. Mesa selects to test and report the glassine packaged D-value for several reasons:

Mesa provides its customers with quality products at affordable prices. In this case, the assessment in glassine provides the most accurate and reproducible “bench-mark” resistance value in a situation where neither value (glassine or naked assessed) is applicable to the sterilization cycle.

As a user you need to have a well controlled reference system to evaluate spore resistance performance. The glassine envelope and paper carrier has served as a reference system for decades. Resistance testing the naked carrier in a BIER will provide a D-value that has no relevance to the performance when embedded into a device.