Biological Indicators and Their Relation to Standards Organizations

Background on Standard-Setting Activities in the US

The purpose of setting a standard is to stimulate product innovation and to give the consumer confidence in the products manufactured and tested under the standard. This is accomplished by defining product details, basic safety concerns, performance criteria, test methods, etc. Standards are written based on time-tested and proven methods but should not be so restrictive to be prohibitive to further innovation. Rarely are standards written based on cutting edge technology which may not be feasible or available for general use. However, standards must evolve rapidly in order to continue to be relevant, especially in fields with rapidly developing technology. To evolve rapidly, the development and maintenance of standards must be a ‘‘bottom up” approach and involve the parties directly involved in the area that the standard covers.

In the US, standards are created in a cooperative effort amongst industry, consumers and the government. Standardization is a decentralized, demand-driven process that is free from government control. The government does participate as an equal partner in the standards-setting groups—generally referred to as Standards Development Organizations (SDO)—which further serves to strengthen the entire process. Many other countries use a “top down” approach whereby the government mandates and controls the development of standards.

Standard development is an open process that consists of data gathering, vigorous discussions and debate. There are defined developmental stages, including a series of working drafts, which advance only after a consensus of stakeholders have agreed to the language of the document. An approved standard must be reaffirmed (or withdrawn if no longer relevant) after a defined period of time.

There are over 200 hundred SDOs in the country ranging from the Acoustical Society of America (ASA) to Tree Care Industry Association (TCIA). To prevent overlap and/or duplication in standard-setting activities, the American National Standards Institute (ANSI) was formed with the responsibility of coordinating the standardization efforts. ANSI is the administrator of the nation’s SDOs, and a standard cannot be considered an “American National Standard” until ANSI approves of the document. Currently, there are approximately 10,000 American National Standards. Biological and Chemical Indicators, being classified as medical devices when used in health care settings, belong to the SDO known as the Association for the Advancement of Medical Instrumentation (AAMI). Mesa Labs, as well as other BI manufacturers, participates in these AAMI committee meetings.

ANSI also represents the United States as the National Body member to the International Standards Organization (ISO). ISO serves a similar function to ANSI, but on the international level, and each participating country sends its own National Body member. A standard cannot be considered an International Standard until ISO approves of the document. ANSI, as the National Body member to ISO, will often delegate its position as the secretariat1 to a SDO that will best represent the American position. In the case of BIs, AAMI has been delegated by ANSI as the secretariat and as such is the US representative at the ISO committee meetings.

[1] The officials entrusted with administrative duties, maintaining records, and overseeing or performing secretarial duties, especially for an international organization.

The standard for general requirements on the production of biological indicators is ANSI/AAMI/ISO 11138- 1:2006. From this designation it is noted that this document is an AAMI standard as well as the American National Standard and the International Standard. The exact same standard used in the United Kingdom carries the designation BS EN ISO 11138-1, where the “BS” stands for British Standard, and the “EN” stands for European Norm. Manufacturers in the US and the UK that are compliant to this standard should produce BIs according to the defined specifications resulting in well-defined performance characteristics. Likewise, a consumer purchasing spore strips for example should expect similar performance from the product when purchased from any worldwide manufacturer claiming compliance to the standard.

Since it is not mandatory, how does a consumer know when a manufacturer is producing according to a standard? Most manufacturers that claim compliance to a standard are proud of that fact and readily advertise this in their product labeling and sales/marketing information. Claiming compliance is one thing, but generally that alone is not sufficient for most consumers - proof is needed. The consumer has a few options when it comes to verifying a manufacturer’s compliance claims, most commonly used are 2nd and/or 3rd party audits of the manufacturer.

For its Biological Indicator products, Mesa claims compliance to ISO 90012 , ISO 134853 , and the ISO 11138 series. For standards such as ISO 9001 and 13485, many manufacturers will use an accreditation body. Per ISO, accreditation is “the formal recognition by an independent body, generally known as an accreditation body that a certification body operates according to international standards.” The independent body that Mesa uses is AB Certification and an example certificate from a recent audit can be found on the third page of this document. The consumer can request a copy of these certificates, which serve as proof of compliance to the standard(s) listed on the certificate. For some standards, such as the ISO 11138 series, there are no accreditation bodies and generally the consumer will then perform an audit of the manufacturer themselves.

Standards have proven to be beneficial to both the manufacturer of products and the consumer. Mesa Labs readily complies with all appropriate standards and devotes significant time participating in the standard-setting activities. In doing so, we stay abreast of the current technology and can react quickly to any revisions of the standards. 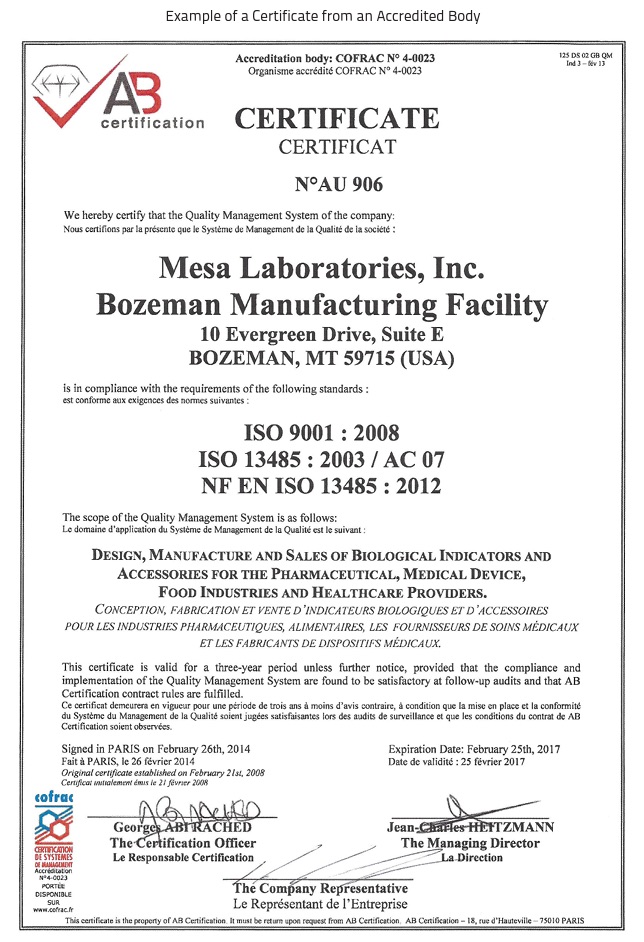 Kurt McCauley is the Director of Laboratory Production for Mesa Labs at the Bozeman manufacturing site. He began work at Mesa Labs in 1995 and has been involved with all aspects of biological indicator production and development. Most recently Mr. McCauley was the Research and Development Laboratory Manager, a position that involved BI design work and oversight of the Contract Studies Laboratory.

Mr. McCauley has a B.S. in Microbiology from Montana State University, is a member of the Institute For Thermal Processing Specialists (IFTPS) and the Association for the Advancement of Medical Instrumentation (AAMI).