As many of you are probably aware, Mesa purchased Process Challenge Devices LLC. in October of 2014 and moved the manufacturing of their line of process challenge devices (PCDs) for monitoring ethylene oxide (EO) sterilization processes to its Omaha, Nebraska facility. So, now you might be wondering: PCDs, what’s the point, it’s just a biological indicator in fancy packaging.

Historically, medical device manufacturers and contract sterilizers had to place biological indicators (BIs) inside their medical devices or deep within a pallet of material in the most difficult to sterilize area so that they could adequately confirm the sterility of their products. Once the sterilization process was complete they had to retrieve the BIs and process them. There were numerous downsides to this process that made it an undesirable practice:

The best way to eliminate the need for planting BIs inside the load was to develop an external PCD that could be placed on the outside of the load to mimic the performance of the internal BIs. Over the years, biological indicator manufacturers and end users alike developed PCDs to monitor specific loads. The down side of these devices was that they were a set design that provided a very specific resistance range. If the design didn’t work for a particular load/process it was back to the drawing board. Mesa’s line of PCD products with its broad range of available resistance levels and BI types eliminates this problem.

Mesa’s lineup of PCD products consists of standard biological indicators packaged in pouches composed of proprietary plastic film combinations. The pouch is attached to a plastic card that adheres to the exterior of the medical device packaging or pallet of material. Once a manufacturer or contract sterilizer qualifies the performance of a PCD configuration against their internal biological indicator performance and shows equivalence, they eliminate the need for the internal BI all together. All they have to do is affix the PCD to the exterior of the packaging/pallet. No more dismantling loads and compromising packaging while trying to locate and retrieve the BIs. Affixing the PCD to the exterior of the pallets allows for quick retrieval of the PCD, which significantly reduces the potential for EO exposure by the technicians, thus creating a much safer work environment.

Mesa currently offers six (6) PCD pouch types for monitoring ethylene oxide sterilization process. Each pouch type has a different permeability rate for ethylene oxide, thus allowing us to offer a broad range of resistances for a given type of biological indicator. The table below lists them in order of resistance from least to most resistant:

Over the years you’ve heard us refer to biological indictors as a system. It’s not just the bacteria that creates the resistance of the product. It’s the bacteria, the inoculated substrate and the primary packaging that all come together to produce the D-value that we label all of our BI products with. If we apply the same “biological indicator is a system" approach to a pallet of product being sterilized with a BI placed at the most difficult
to sterilize location, then we need to determine the resistance of this new system. As you could imagine, placing the BI in the interior of a pallet of goods significantly increases the resistance of a standard biological indicator. There are many different types of BIs available for monitoring EO sterilization, but even though there is a wide range of products available they all fall within a specific resistance range. That range is typically from 2.5-5.8minutes with the overwhelming majority of commercially available product being in the range of 2.5.-3.5minutes. Once we take the packaging configuration of all the items on the pallet it's possible that the
resistance increases 10-fold. This is because the sterilant has to pass through all of the packaging material be- fore it gets to the BI. So in this instance, if an end user wanted to convert to an external PCD they would need something that produced a resistance of around 30minutes. Using our PCD products we are able to take a BI with a 3.0 minute D-value and offer a resistance range from as low as 3 minutes to as high as 58 minutes. By having such a broad resistance range we are able to provide the end user with a resistance that takes this new biological indicator system into account. This is accomplished by selecting plastic films for the pouches that control the diffusion rate of EO through the PCD film.

The table below displays the nominal resistance for three types of common biological indicators packaged in
the six (6) PCD pouch types: 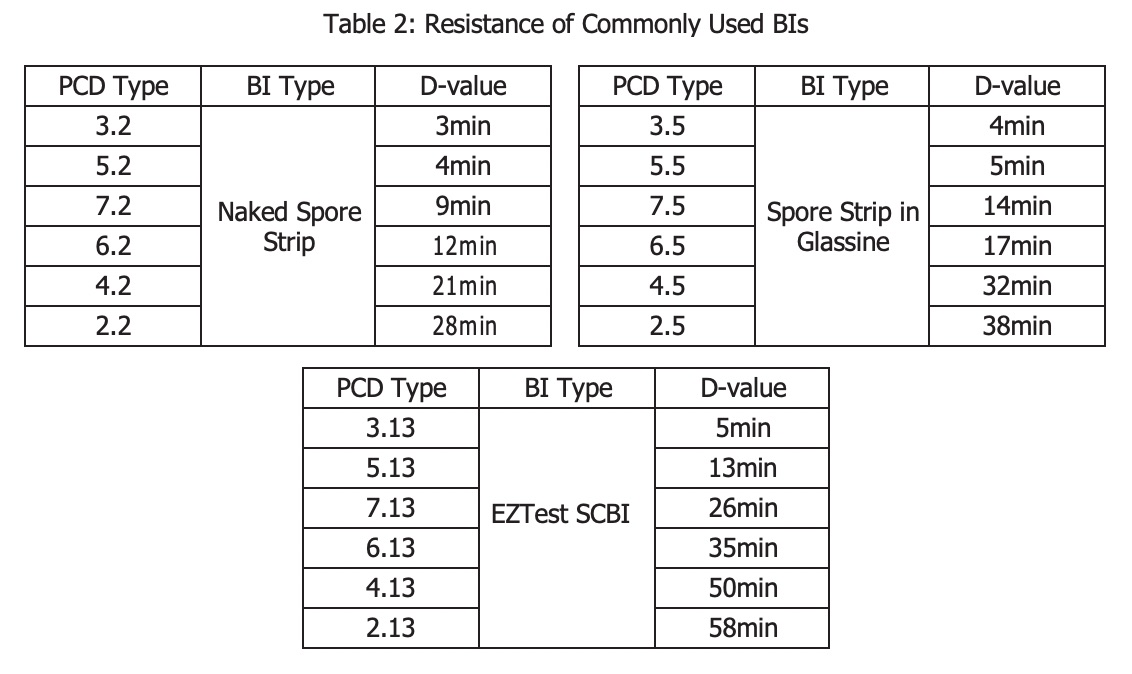 The tables listed on page 2 detail a number of different types of PCD: PCD type 2.13, 6.5, 3.2. What does that mean? All of the PCD products that we offer follow a unified catalog numbering format. The number starts with PCD and then is followed by a 2-3 digit number. The first number represents the type of pouch. If you order PCD 2.13 it will be composed of a type 2 pouch (represented by the first number). The 1-2 digit number following the decimal point represents the type of BI in the pouch. Below is an example key that shows the most common BI types used in PCDs:

For additional questions regarding PCD selection or use, please reach out to our Mesa BI Technical Support Team at bi-support@mesalabs.com.

Robert Bradley is the Director of Laboratory Production for Mesa Labs’ Omaha Manufacturing Facility. He started out with the company in March of 2003 as a Testing Coordinator. In that role he was involved with biological indicator production, research & development and contract studies. In 2004 he became the Laboratory Manager where he oversaw biological indicator production and contract studies. He served in that position until promotion into his current role in October of 2010. Mr. Bradley holds a B.S. in Biology from Midland Lutheran College and a M.S. in Biology from the University of Nebraska at Omaha. He is a member of the Association for the Advancement of Medical Instrumentation (AAMI), the Parental Drug Association (PDA), and the American Society for Microbiology (ASM).