What is the D-ifference in D-value?

Occasionally our Customer Service Department receives a request for biological indicators (BIs) with either a very specific and/or narrow range of acceptable D-values. As an example, a recent order was received in which the customers’ specification for EZTest Gas BIs was a D-value not to exceed 3.5 minutes. Scanning the available inventory, it was determined that a lot with DEO-value of 3.6 minutes was available for immediate shipment. (In fact, the non-rounded D-value for this lot was 3.5556 minutes.) The client declined to receive that lot and requested that a new lot be manufactured to meet the 3.5 minute criteria.

To determine whether a BI with 3.5 minute DEO-value is acceptable for use in a process cycle, but any value in excess of 3.5 minutes is unacceptable, consider the fractionnegative EZTest Gas D-value data presented in Table 1. The values are presented as number of negative units/number of units exposed with Empirical Kill Times* highlighted. At a quick glance the data sets in Table 1 appear different, but are they really different? 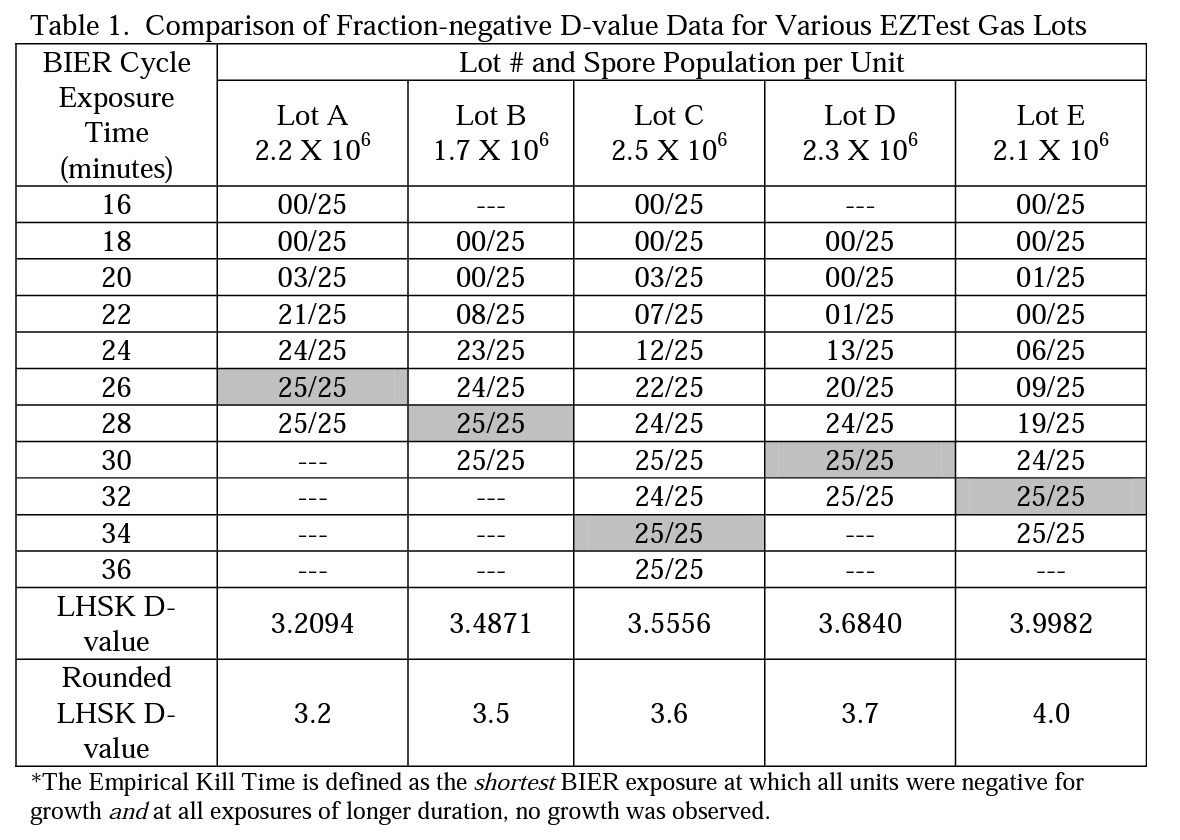 *The Empirical Kill Time is defined as the shortest BIER exposure at which all units were negative for growth and at all exposures of longer duration, no growth was observed.

These subtle differences in fraction-negative data are detectable only in a Biological Indicator Evaluator Resistometer (BIER) which delivers “square-wave” lethality. The term square-wave is applicable in that a BIER controls to within a very tight set of exposure conditions and during the exposure dwell phase, steady-state conditions are achieved and maintained. A BIER will:

As a result of this type of cycle performance, all of the lethality in each BIER cycle is delivered to the BIs in one concise and succinct dose.

By comparison, a process vessel operates with much more variation in conditions. ISO 11135:1994, Annex A states that a temperature range for an empty chamber during gas exposure of +/- 3ºC of the set point is permissible. When loaded, the product should achieve the minimum specified temperature and the range of observed temperature recordings throughout the load should not exceed a 10ºC spread. The 11135 document is in the final stages of revision and the version that will be published in 2006 appears to be even less stringent on cycle parameters. While the +/- 3ºC criteria for empty chamber cycle performance is slated to remain in place, the 10ºC maximum temperature spread throughout the product load may be lifted and replaced with a non-specific maximum temperature provided that maximum temperature does not impact product or function of the packaging.

Based upon the variation in critical process parameters that exists within a loaded production sterilizer, steady-state conditions may never exist. During an EtO production cycle:

A vast array of molecules is attempting to reach a state of equilibrium within the loaded vessel. The temperature of the product has an effect on molecular activity while pressure changes in the vessel have an effect on the direction of molecular movement.

The critical parameters are dynamic and constantly fluctuating such that chaotic-state conditions would be a more accurate description of the lethality delivered in a process vessel. This molecular chaos takes a long time to reach equilibrium and may never achieve such a condition in typical cycle times. Unless the temperature stabilizes, molecular equilibrium will not occur. The spores respond to the exact conditions prevailing at the specific location of the BI. Unlike a probe that records only one process parameter in one location within the chamber, the spores integrate the overall lethality that exists throughout the product load as a result of these dynamic process conditions.

Whereas the tight performance parameters of a BIER result in delivery of square-wave lethality, the broad range of performance in a production sterilizer results in “process vessel lethality.” In contrast to the 60-second charge time in a BIER, the gas charge phase to reach the appropriate concentration in a process vessel may take 10 to 40 minutes. Subsequent attainment of exposure temperature within the load may take even longer; during which time, lethality is being delivered to the bacterial spores in the BIs despite the fact that we have yet to achieve the exposure process parameter set points. The exhaust time in a process vessel may take a long time depending on the product packaging. Due to the comparatively long times to attain exposure conditions and subsequent removal of EO gas as well as the chaotic-state conditions that prevail during the exposure phase in a process vessel, slight differences in BI resistance performance, such as those seen in Table 1, cannot be detected in a process vessel.† The accumulated lethality delivered during only the gas charge and exhaust phases is often sufficient to inactivate the spore challenge of the BI. This was demonstrated in a study by Mosley et al (2002) in which zero-minute exposures were run for validation testing of various medical products. Using both spore strips and self-contained BIs, the accumulated lethality delivered in the zero-minute exposures resulted in few or zero positive test units.1

†As an analogy, consider the fraction-negative data sets in Table 1. How would those data sets appear if it were only possible to program the EtO BIER with exposure intervals that differed by 10 or 15 minutes? The data set would “jump” from 100% survival to 0% survival of the exposed test units with one adjacent exposure. Exposing BIs in a process vessel is somewhat similar to using a BIER that could only run exposure increments of 15-minutes.

What then is the function of a BI if most of the test units will be inactivated by the lethality delivered only in the gas charge and exhaust phases of a process cycle?

When BIs are used in validation the approach is either 1) a combination BI/bioburden approach, or 2) overkill approach. Most of the customers we work with use the overkill approach, which is also referred to as the half-cycle method.

Overkill validation by design has a significant extended process beyond where the BIs were demonstrated to be killed. This extra process time is equated to Sterility Assurance Level (SAL). Therefore, if a BI is positive (survives a validated cycle), then all of the “extra” lethality designed into the process has been “lost”.

The BI as a routine monitor is therefore a system to be used to detect catastrophic process failures; such failures do occur. Currently, no physical instrumentation systems are available that can be embedded in the most difficult to sterilize location of the product to measure all critical process parameters. As previously stated, the bacterial spores in the BI effectively integrate all critical process parameters at all times during the cycle and respond to the exact lethal conditions that exist in the specific location in which the BI is placed.

An example of a catastrophic failure is inadequate moisture (humidity) where the BI challenge is located in the load. When humidity is too low, 90% or more of the expected lethality of the process can be lost. The “unexpected” positive test unit in a validated process is not due to use of a BI whose D-value is slightly greater than the desired level, it is due to the loss of a critical process condition(s) and loss of a significant portion of the microbial lethality.

While the D-value may have an effect during cycle development and validation testing, slight lot-to-lot differences in D-value (detectable in a BIER) will not result in positive BIs when used in a full cycle production vessel.

THE DIFFERENCE IN D-VALUE

As outlined above, D-value assessment is conducted in a BIER with tightly controlled cycle parameters. Both USP and ISO state that when a manufacturer confirms the Dvalue reported on the CofA, results within +/- 20% of the label claim are considered adequate reproduction of the original assessment. Thus, even with the precise performance capabilities offered by a BIER, it is recognized that small differences in retest data are expected. From Table 1, the median D-value is 3.6 minutes. Using the +/- 20% criteria, retest values that were within 2.88 to 4.32 minutes would be acceptable reproductions of the 3.6 minute label claim. From a resistance performance perspective, the above lots cited could be considered identical as all D-values are within +/- 11% of the median 3.6 minute value.

Regardless, we do encounter customers who decline to use a BI with a D-value even slightly higher than their requested maximum value for fear of observing a positive test result. In a recent communication an EZTest lot with D-value of 3.5556 minutes was considered not acceptable. Upon review of the resistance performance data, the customer was concerned that the high population per unit (2.5 X 106 ) in conjunction with the Dvalue (3.6 minutes, as reported on the CofA) would result in a calculated kill time that is too robust (see sidebar). In this instance, the D-value exceeded the clients’ 3.5 minute maximum specification by 0.0556 minutes (3.3 seconds)*.

*In the fraction negative data set for the 3.5556 minute D-value lot, 225 BIs were used to span the empirical survival time to empirical kill time range. Of those 225 BIs, 142 tested negative for growth. Had one fewer BI tested positive (i.e., 143 negative replicates of the 225 exposed) the non-rounded D-value would be 3.5436 and the rounded value reported on the CofA would have been 3.5 minutes.

One should note that the D-value for the BI is independent of the spore population. The resistance performance for an assembled BI is a function of the spore, the carrier material on which the spores are deposited, the primary packaging, the recovery medium used and incubation conditions employed. The 3.6 minute D-value result would be obtained if the population per BI for the lot in question were 1.0 X 106 , 5.0 X 106 , or 7.4 X 104 .

The Calculated Kill Time is derived using the equation:

The Calculated Survival Time is derived using the equation:

While USP and ISO require the manufacturer to include the calculated survival and kill times on the CofA, these numbers are of limited value when viewed in terms of process spore log reduction (SLR). To illustrate this aspect, consider the resistance performance for EZTest Gas Lot B (see Table 1). With D-value defined as the time at a specified set of exposure conditions necessary to reduce the viable spore population by one log, the following death kinetics are applicable. 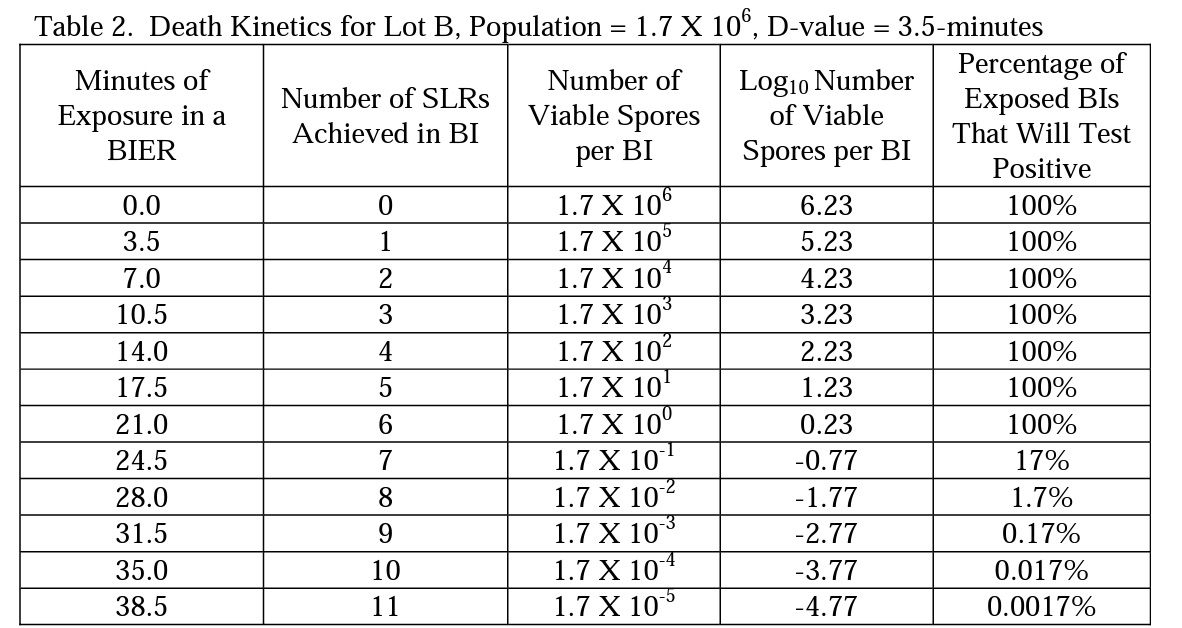 † 25 BIs exposed in each cycle

As stated previously, the client rejected the 3.6 minute D-value (Lot C) stating that the calculated kill time would be too great. The calculated kill time for the 3.5 minute Dvalue (Lot B) is 35.81 minutes and this lot was considered acceptable to the client. Notice from Table 1 that if any of the lots were exposed in a 35.81 minute BIER exposure, ALL test units would be inactivated, including those with a D-value of 4.0 minutes.

EO BIER vessel standards require the specified set of conditions to be maintained at 600 +/- 30 mg/L EO, 54 +/- 1ºC, 60 +/- 10% RH. Also required is the attainment of EO gas concentration and subsequent evacuation of the chamber be achieved in 60 seconds or less. Such exact conditions result in attainment of steady state conditions and delivery of square-wave lethality which allows one to observe the slight differences seen in Table 1. However, when exposed in a process vessel it is impossible to ascertain these subtle differences in resistance performance.

We must be careful to not implement specific performance requirements where such limiting factors are not warranted. The perception that a BI must have a specific and narrow performance range for monitoring validated process cycles is an inappropriate approach.

The unexpected positive test unit in a validated process is not due to use of a BI with Dvalue slightly greater than the desired level. The positive BI results from the loss of critical process conditions and loss of a substantial portion of the microbial lethality. The D-value on the Certificate of Analysis is an accurate estimate of resistance for a specific set of exposure conditions. It can have an effect during cycle development but is not a concern for positive BIs in a normal, full cycle production run.